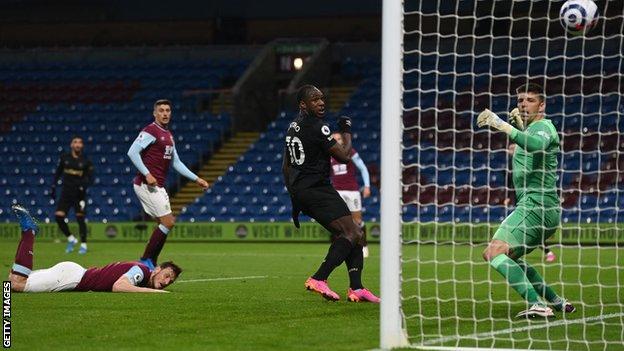 West Ham forward Michail Antonio said they will not give up on their dream of securing Champions League football after he scored twice in a comeback victory over Burnley.

The Hammers moved up to fifth place in the table, just three points behind Chelsea in fourth, with four games of the season remaining.

Chris Wood scored from a penalty to give Burnley the lead before Antonio headed in Vladimir Coufal’s teasing cross and poked in Said Benrahma’s delivery eight minutes later.

Antonio, who returned after four weeks out with a hamstring injury, said: “It would be unbelievable. Everybody wants to play in the Champions League.

“I have been here a few years and there have been so many seasons we were fighting to stay in the league and now we have the opportunity for top four.

“We are not going to give up on it. We will keep fighting, keep pushing.”

West Ham boss David Moyes said: “We want to take it down to the final day and try to sneak in. It will probably need us to win all four games.

“Europe would be an incredible achievement. I think I’ll be disappointed if we don’t get there now.”

West Ham created numerous chances to extend their lead after Antonio’s double but Burnley could have made it 2-2 when Jay Rodriguez lashed a shot wide from close range.

The game was finely balanced in the opening stages but Wood’s spot-kick seemed to spark West Ham’s creativity.

Their response to going behind was excellent – Antonio’s equaliser came just 154 seconds later, capitalising on a wicked cross from Coufal.

The full-back continued to put in dangerous crosses, while Benrahma caused Matt Lowton nightmares on the far side.

Benrahma’s superb cross for Antonio’s second capped off an impressive individual display. He could have scored himself but he unselfishly opted to play in Jesse Lingard in the first half and put too much weight on the through ball.

Manuel Lanzini shone in midfield in the absence of Declan Rice and Mark Noble, while Antonio ultimately dealt the crucial blows.

The striker should have had a hat-trick too – in the second half, he hit Pablo Fornals’ scuffed shot against his standing leg when it fell fortunately for him at the back post just a yard from the line.

Burnley show fight but undone in first half

Burnley are now without a win in their past eight home league games – their joint-longest run in their top-flight history.

But while they remain two places above the drop zone, they showed the type of character which will no doubt keep them up for the fifth season running.

Wood took his goal well, firing it into the bottom left corner after winning the penalty when he crept in behind West Ham’s Issa Diop, flicked it over his head and got a touch on the ball ahead of Tomas Soucek, who brought him down.

Diop was the weak link in West Ham’s defence and Wood got the better of him on a few occasions, before Matej Vydra almost scrambled in an equaliser when Craig Dawson cleared off the line.

Burnley kept themselves in the game – Ben Mee blocking strikes from Fornals and goalkeeper Nick Pope denying Lingard in the second half.

Rodriguez’s miss from close range was the chance they needed to convert but Burnley pushed late on to win a few corners, for which Pope came up.

Manager Sean Dyche threw on striker Ashley Barnes, returning from injury, for the last five minutes but the hosts could not create a clear-cut opportunity.

In the end, West Ham’s attacking intent in the first half did the damage when Burnley failed to deal with Antonio’s presence in the six-yard area.

‘We’re not far away from Europe’ – what they said

Burnley boss Sean Dyche said: “They are good outfit. They are chasing Champions League football and looked like it. They have pace and play good on the transition.

“We have not gone far wrong. Two soft goals – especially the second – but a lot to be pleased with. The first one is a breakaway. The second we don’t read the cross. I don’t want to be overly critical.”

West Ham boss David Moyes said: “The team played really well. We won 2-1 but I felt it was a lot more than that. We rode our luck at the end but we should have been out of sight.

“I’d love to be in Europe. It would be an incredible achievement. We’re not far away from the Champions League positions. We’ve got to keep believing.”

West Ham’s Michail Antonio on muted celebrations: “I’ve had a couple of goals disallowed by VAR. I thought ‘I don’t want to be there doing a dance and the goal gets disallowed’. I’ve toned down my celebrations. A couple of times I’ve been about to do one and had a handball or whatever… VAR has killed it.”

A threat in the air – the best of the stats