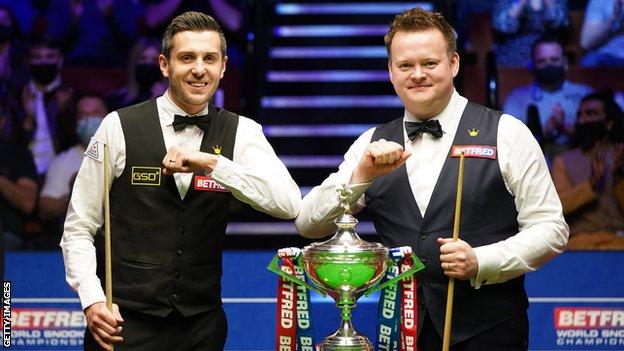 Mark Selby delivered a vintage display as he came from behind to open up a three-frame lead against Shaun Murphy in the World Championship final.

Fellow Englishman Murphy went closest to the first century of the match with a run of 98 but otherwise struggled to find his rhythm as Selby dominated.

Murphy, aiming to win his second world crown 16 years after his 2005 triumph – which would become the largest ever gap between titles – had eked out a slender lead on Sunday afternoon, in front of a crowd of around 600, the highest of the tournament so far.

But as the match wore on, the energy and tempo which he carried over from his fine semi-final win against Kyren Wilson slowly appeared to drain away.

Six-time former champion Steve Davis had cast Selby as a Dementor from the Harry Potter films in the build-up to the match because of his ability to stifle and smother his opponents.

And at times the tag appeared perfectly apt, particularly during the tactical exchanges, which Selby generally enjoyed the better of.

However, Selby also made sizable breaks when given the opportunity to score and looks close to the form which took him to three world titles between 2014 and 2017.

Seeking a fourth world title that would place him behind only Stephen Hendry (seven), and Ronnie O’Sullivan and Steve Davis (both six) for Crucible crowns, he opened with a brilliant 85 and was unperturbed when Murphy responded with a 98.

And Selby then got on a roll, winning six of the next seven frames, including a composed 86 clearance after a re-rack in the 12th.

A foul and two breaks of 48 and 57 saw him level at 7-7 and after a 90 saw him move ahead for the first time, he used all the experience gained in four previous finals to pull clear.

While that concluded a disappointing evening for Murphy, he can take heart that his only previous world title arrived after he overcame an even bigger deficit when trailing Matthew Stevens 10-6 at the same stage in the match.

The event has been used part of a UK Government pilot scheme to allow crowds to return after an easing of Covid rules.

In contrast to the surreal atmosphere that accompanied the rearranged 2020 World Championship, both players were greeted by huge roars as they entered the auditorium.

Speaking to BBC Sport Hendry said: “I’ve got shivers and I’m not even playing. We wondered if this would ever happen again – it’s incredible to see.

“The tension that is thrown in by the crowd is something we’ve all missed. Every sport has missed it but here at the Crucible it is just special.”

While the final had been earmarked to host a capacity crowd of 980, there were about 600 fans present for both of Sunday’s sessions.

Organisers believe that the hesitation of some to return to an indoor event, plus limitations around travel and accommodation, had impacted the attendance.

Monday’s final sessions are expected to sell out.

The claws are in and they are in deep, Mark Selby is like a snooker vampire. He sucks all the life and adrenaline out of you. He’s just the most unbelievable competitor I’ve ever seen – I would have hated to play against him.I don’t know he does it – all of a sudden he can just make it the kind of game he wants to play.Shaun Murphy doesn’t know what’s happened to him.