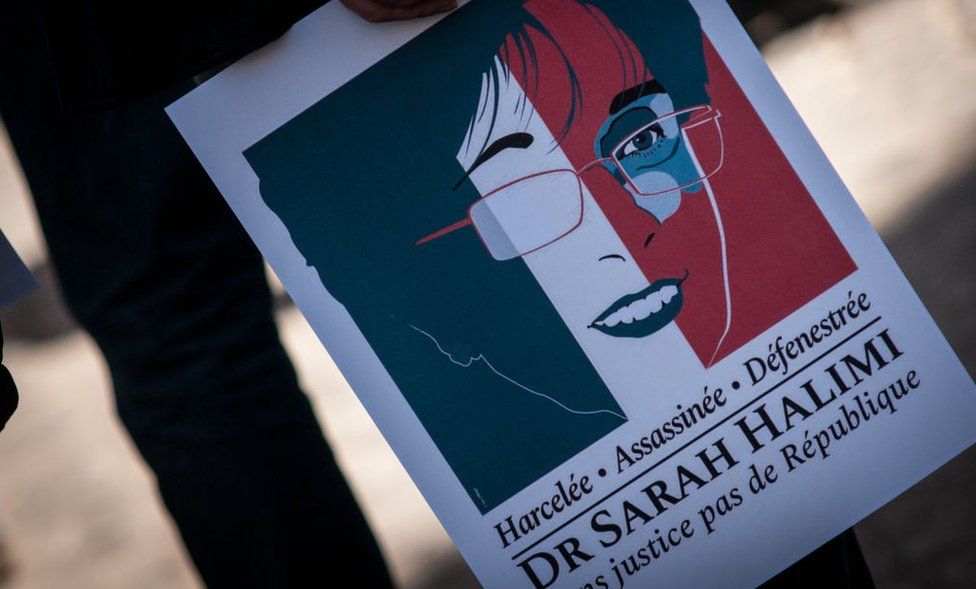 Can an anti-Semitic killer be declared insane because his mind was affected by regular consumption of cannabis? That is the question at the heart of an explosive legal row in France following the decision not to prosecute the man who killed Sarah Halimi.

Sarah Halimi was a Jewish, 65-year-old, former kindergarten director, who in April 2017 was beaten, then thrown to her death from her flat in north-east Paris.

The killer was Kobili Traoré, a Muslim of Malian origin who was her neighbour. During the attack, which lasted between 20 and 30 minutes, he chanted verses from the Koran and shouted “Allahu Akbar” – God is greatest.

Two weeks ago, a decision by France’s highest court of appeal, the Cour de Cassation, triggered a storm of indignation, primarily but not solely in France’s Jewish community. Citing Article 122 of the Penal Code, the judges ruled that Traoré had been undergoing a “psychotic episode” at the time of the attack and that his “discernment” had been “abolished”.

The fact that this loss of control was linked to his voluntary smoking of cannabis over many years was, said the court, irrelevant. The root cause of a madness was not an issue in law, the judges said, as long as the madness was established; and it had been, by independent psychiatric analysis.

And so the Cour de Cassation ruled that Kobili Traoré should not stand trial, but remain in the secure hospital where he has been kept ever since the murder.

Last Sunday thousands protested against the decision in Paris and other cities. There is both reason and emotion behind their fury.

The most obvious argument against the ruling is that it creates a dangerous precedent. As more than one lawyer has pointed out, what now is there to stop other killers from claiming an “abolition of discernment” due to long-term drug or alcohol use?

This is all the more relevant because of the prevalence of cannabis abuse among so many of those found guilty, not just of crimes designated as “anti-Semitic”, such as this one, but also of those designated as “terrorist”.

“Don’t ask me to explain the inexplicable,” said lawyer Aude Weill Raynal. “In most cases, taking drugs is an aggravating factor in a case – and yet here it is regarded as extenuating.”

‘In France we do not judge the mad’

It is true, of course, that in most cases the fact that a killer has taken drugs or drunk alcohol will not stop him or her going to trial – even if there is established a temporary loss of reason – and may even contribute to a stiffer sentence.

But the difference in the Traoré case is expert opinion. Of the three psychiatrists’ reports, two concluded that his discernment was not just “altered” (as it would be if he had just smoked a joint or got drunk) but outright “abolished”.

This was because of the permanent damage to his brain caused by more than 10 years of drug abuse. On the night in question, said the majority of the experts, he was in the grip of a full-scale psychotic attack in which he feared he was being chased by demons.

“The crime was the crime of a madman,” they said in a long justificatory piece this week in Le Monde. “And in France we do not judge the mad.”

But this leads to the second of the arguments against the ruling, which centres on the role of experts in the courts.

Writing in conservative newspaper Le Figaro, philosopher and former minister Luc Ferry said it was a “joke” to regard psychiatry as a “science” on which to base supposedly neutral decisions in law.

“The psychiatrists disagreed among themselves,” he wrote, “one of their reports speaking of ‘alteration’ of discernment, and the other two of ‘abolition.'”

Deciding to take drugs and then “going mad” shouldn’t, in my view, remove your criminal responsibility. I would like the justice minister to present a change in the law very fast

Jack Broda, a judge from Nancy who has resigned in disgust over the Halimi ruling, said magistrates running the investigation accorded too much importance to psychiatry.

“When you call for an expert opinion, it’s not to nod blindly in agreement with the findings. You need to look at all sides, which can only be done in a trial. Justice is not the work of experts,” he said.

But the deepest source of anger is a feeling shared by many Jews that the court’s ruling was preordained. They believe that from the start the investigation failed to address the attack’s true nature – which for them was both anti-Semitic and, if not planned, then certainly springing naturally from Traoré’s known cultural and religious prejudices.

In the end the Cour de Cassation upheld the designation of the murder as “anti-Semitic”, but many campaigners felt it as a sop to allay their anger over the lack of a trial. Others question how a killing can be at the same time officially anti-Semitic – which implies intention – yet also be the work of a man who has lost his reason.

Underlying all these arguments is an assumption: that parts of the French justice system have a left-wing bias that pushes them to take the side of the poor, black Muslim, and downplays the crime against a Jew.

Which is, of course, fiercely disputed.

So, to go back to the original question: yes, in France a killer can be declared legally insane even if the drugs that destroyed his judgment were taken voluntarily. Why? Because the law says so.

If you want to change the judgement, change the law – which is precisely what the French government is now trying to do.

Too late, though, for the family of Sarah Halimi.