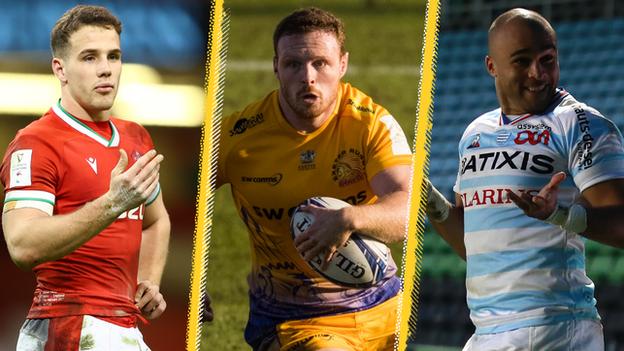 A 23-year-old Martin Johnson made his British and Irish Lions debut after only one England cap.

Keith Earls was just 21, with two Ireland caps to his name, when he toured South Africa in 2009, while league converts John Bentley and Jason Robinson came from left field to light up Lions tours in 1997 and 2001 respectively.

Who could be a surprise selection – or bolter – when Warren Gatland selects the Lions class of 2021 on Thursday?

The European player of the year. The Premiership’s leading try-scorer. A key cog in Exeter’s double-winning team. But apparently not good enough to add to his most recent England cap in 2018.

Simmonds’ omission from Eddie Jones’ plans has become one of English rugby’s most reliable talking points. Could Gatland take a different view?

Simmonds, 16st 2lbs and 6ft tall, isn’t a super-sized back row. But he is compact enough to lever into breakdowns bigger men can’t. And he has pace to burn.

The most eye-popping example was in November’s win against Harlequins, when Simmonds burst through a hole on halfway, swerved outside the full-back and celebrated his score with a nonchalant shrug.

On South Africa’s firm ground, with a point to prove, could he be an ace in the hole for the Lions?

The 25-year-old scrum-half has made only three Test starts for Wales, but might have been the man in possession of Wales’ pass-the-parcel nine shirt but for an untimely hamstring injury in a superb try-scoring display against England.

The Scarlets scrum-half is a quick, clever runner with a nose for a gap in the fringe defence.

Selection to the British and Irish Lions squad would cap a remarkable rise. Fewer than four years ago, Hardy was playing in the English second-tier Championship as he struggled to get game time ahead of Scarlets team-mate Gareth Davies.

Ben Youngs’ decision to remove himself from consideration for the tour might leave the Lions coaches less well-staffed than expected at nine as well.

Care admits the prospect of him being in contention for the Lions tour at the start of the season seemed laughable.

The Harlequins scrum-half won the last of his 84 England caps against Japan in November 2018.

But since the turn of the year and a change of head coach at Quins, Care has rediscovered the best form of his career.

The 34-year-old specialised in the ‘finisher’ role during the latter part of his England career, stretching play and darting through holes as players tired and space opened up.

Could Gatland imagine a similar role in his final chance to tour with the Lions?

Another scrum-half, another man who has found himself left in the international cold.

Cooney has struggled to convince both Joe Schmidt and, now, Andy Farrell that he is worth more than the occasional cameo off the bench for Ireland.

But he was Ulster’s star man in the early part of 2020 and, after a brief post-lockdown dip, has resumed that form in the past few weeks.

Lions coaches Gregor Townsend and Steve Tandy were on hand at Welford Road on Friday night to see Ulster lose control of their European Challenge Cup semi-final after Cooney departed with a head-knock early in the second half.

As well as canny support lines, pace and footballing ability, Cooney is also a reliable goal-kicker.

This would be one from left field, but centre is one of the areas – along with scrum-half – where there are places up for grabs.

Cameron Redpath has made only one international appearance. But what an appearance it was.

The 21-year-old centre strolled through Scotland’s first win at Twickenham in 38 years, making the step up to the Test arena look effortless.

He was prevented from playing any further part in the Six Nations by a neck injury but has recently made his comeback for club side Bath, where his agility and pace give him the impression of always being in space.

His father Bryan won 60 caps for Scotland as a scrum-half but never toured with the Lions.

Out of sight, out of mind?

Zebo can play full-back as well as wing, was a popular tourist when called up to the 2013 trip to Australia and links well on and off the pitch with Racing 92 team-mate Finn Russell, who seems a certainty to make the 2021 trip.