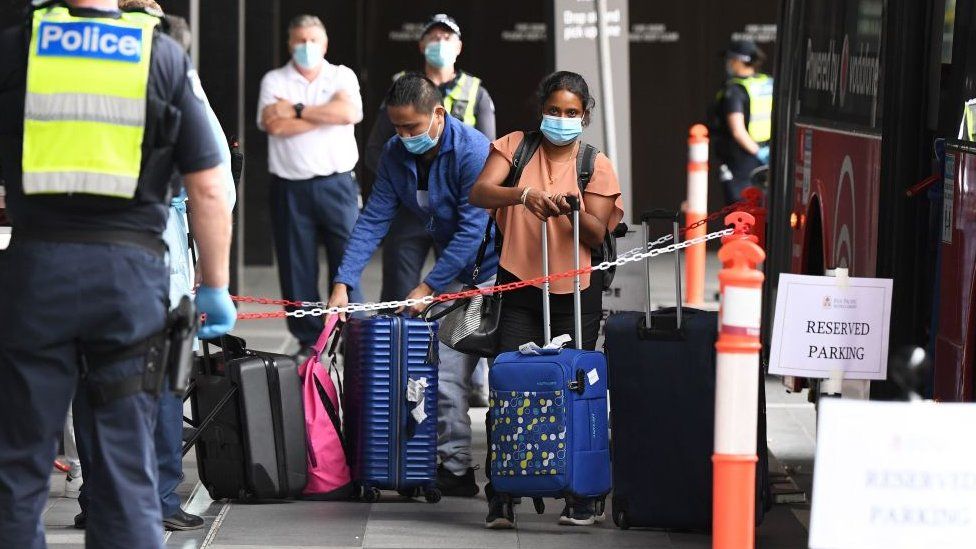 Australia’s threat to jail citizens returning home from India has sparked condemnation, with critics labelling the Covid measure as “racist” and a breach of human rights.

From Monday, any Australian arriving in the country from India faces fines and up to five years in prison.

It comes after Canberra banned all flights from the virus hotspot until 15 May.

“The same accusations were made against the government over a year ago when we closed the borders to mainland China,” he told Sydney radio station 2GB.

“There’s no politics or ideology in a pandemic… It’s got nothing to do with politics, this is a virus.”

There are an estimated 9,000 Australians in India, 600 of whom are classed as vulnerable.

The government has said the measures, which were announced on Saturday, are based on medical advice.

Australia has been successful in managing Covid outbreaks, but officials said a rise in infection rates seen in Indian arrivals over the past fortnight posed a threat to the community.

Foreign Minister Marise Payne said India arrivals account for 57% of positive cases in quarantine, up from 10% in March.

She said this placed a “very, very significant burden on health and medical services”.

However critics – among them medical experts and legal groups – argue the government’s response is extreme and disproportionate to the health risks.

Federal Greens Senator Mehreen Faruqi wrote on Twitter that the ruling was “absolutely horrific and racist”.

Prominent conservative media commentator Andrew Bolt said the policy was “so mean and irrational that I must also blame racism”.

“I can’t believe we would impose such a travel ban on white Australians fleeing, from, say England.”

Australia’s former Race Discrimination Commissioner Tim Soutphommasane pointed out the “inconsistency” in the government’s policy, noting bans and criminal penalties weren’t imposed on Australians returning from other nations at the height of their Covid waves.

“We didn’t see differential treatment being extended to… the United States, the UK, and any European country even though the rates of infection were very high and the danger of arrivals from those countries was very high,” he told the Sydney Morning Herald newspaper.

“There are different standards at play here depending on which part of the world you’re coming from.”

Members of the Indian-Australian community – about 2.6% of the population – have expressed anger over the sudden ban. Some have told the BBC they feel they are being treated like criminals and “second-class citizens” for wishing to flee danger.

Legal experts have also raised concerns that the temporary ban violates international law. That includes the right for citizens to return unhindered to their country – recognised in the International Covenant on Civil and Political Rights, to which Australia is signatory.

The Australian Human Rights Commission said in a statement: “The Government must show that these measures are not discriminatory and are the only suitable way of dealing with the threat to public health.”

The situation in India has also put renewed focus on Australia’s quarantine system.

The country operates a strict policy of mandatory, 14-day quarantine for all international arrivals – mostly conducted in hotels. The government said the spike in positive cases from India threatened to overwhelm its quarantine system, which has capacity for a maximum of 2% of arrivals being infected.

The Australian Medical Association, the nation’s peak medical group, said the need to pause Indian arrivals reflected the “frailty” of the quarantine system.

“We would rather our governments focus on fixing the quarantine system and bring Australians home, rather than extend this ban any longer than it needs to be.”