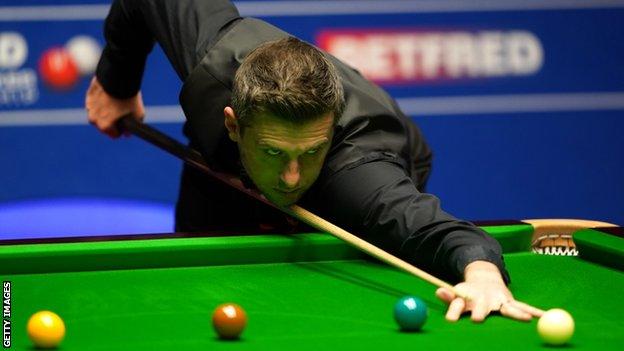 Mark Selby moved to within a frame of his fifth World Championship final as he came from behind to lead Stuart Bingham 16-15 in a gruelling affair.

Play was then halted for overrunning – the first time the final session of a world semi-final has been interrupted.

Shaun Murphy and Kyren Wilson are level at 12-12 in the other semi-final.

Once that has been played to its conclusion, then Selby and Bingham are scheduled to return to conclude their best-of-33 encounter.

Former world champion Ken Doherty, speaking on BBC Two, said: “It’s unfortunate they had to come off but that’s the rule.

“The guys coming in are getting ready to play their semi-final and it is not fair if they have to wait.

“I feel sorry for these guys [Mark Selby and Stuart Bingham] because they have been involved in such a pulsating match with so much at stake.”

Selby and Bingham edge towards a finish

But he now has it all to do when play resumes after appearing to be stifled by Selby over the course of several protracted frames.

A superb long red kickstarted Selby’s revival as he made a break of 68 to get under way.

And he then drew level at 13-13 with a brilliant 125 after a prolonged frame, which saw a double re-rack for the second time in the match.

In front of a Crucible crowd of 444, the largest of the tournament so far, Bingham responded in superb fashion with a 100 break, which brought up the 101st century of the Championship – beating 2019’s marker to establish a new record.

However, Selby then won the next three frames, a run that included a 132 break, to go 16-14 ahead before Bingham held his nerve to extend the match.

Murphy on the march

Earlier on Saturday, Murphy had produced a stirring fightback to draw level with Wilson, who faltered after leading 10-6 overnight.

World number six Wilson is looking to reach the final for the second consecutive year and looked in a strong position when he took the day’s opening frame.

But Murphy’s quest to reach a fourth Crucible final on Sunday then gathered momentum.

After collecting two scrappy frames, he made a 79 to get back to 11-8 and further reduced his arrears by pinching the final frame before the mid-session interval after capitalising on a Wilson in-off.

With emotions running high, a superb long black drew a fist-pump celebration and shout of “come on” from the 2005 champion.

His march seemed to have been brought to a halt when Wilson made an 86 after the resumption.

However, it proved a temporary disruption with Murphy making a superb break of 120 to close the gap to 12-10, before taking full advantage of two Wilson errors to draw level.