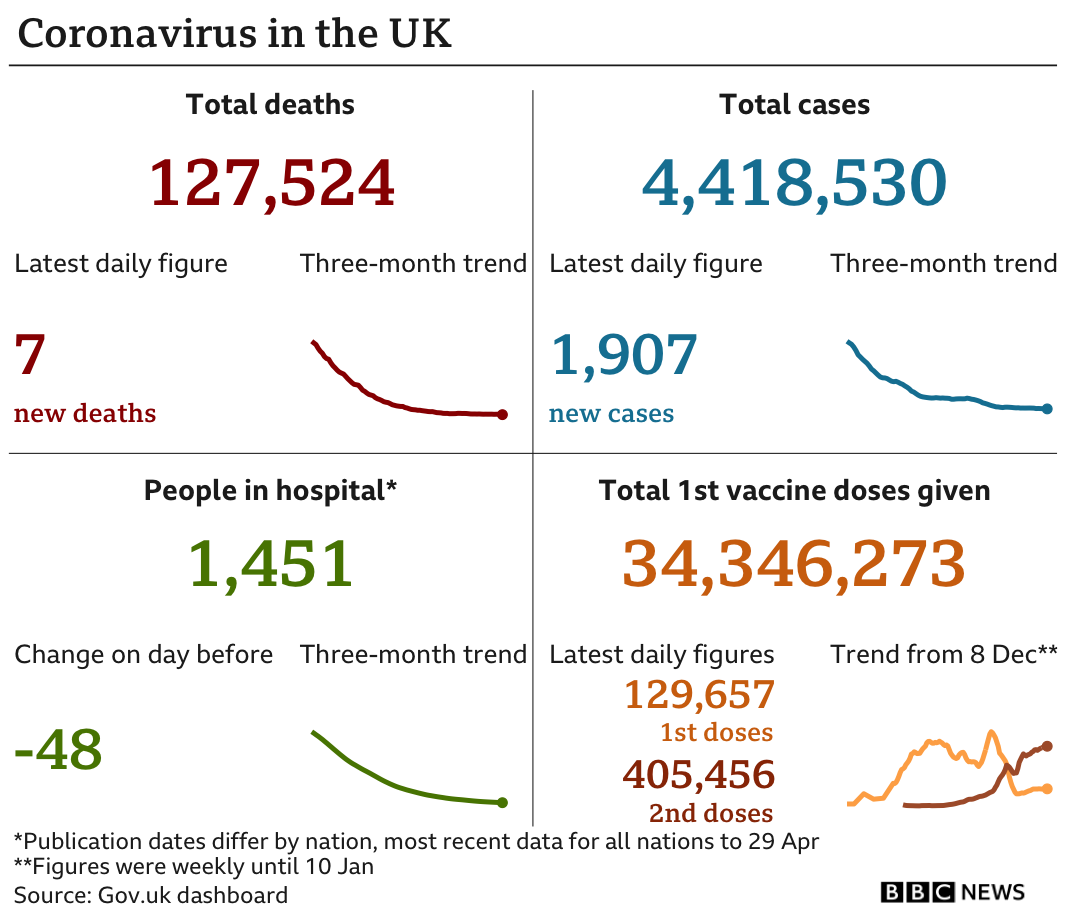 People may not need to self-isolate if they have been in close contact with someone with Covid, if a new trial is successful.

The government-backed research will trial giving people daily lateral flow tests for seven days – instead of quarantining for 10 days.

So long as they test negative all week, they can carry on with their lives.

It comes as the foreign secretary said the country was “in a good position” to end almost all restrictions on 21 June.

But Dominic Raab told BBC One’s Andrew Marr Show “we need to keep tracking the variants and tracking the evidence” as the UK gradually reopens.

He said “some safeguards” may need to remain beyond the end of June, which could involve some use of masks or social distancing, but the goal was to “get life back as close to normal as possible”.

From 9 May, about 40,000 close contacts of people with Covid in England will be invited to take part in the study replacing quarantine with daily testing.

Self-isolating means staying at home and not leaving it – not even to buy food or medicines, or for exercise.

As part of this major new study, people will have to test themselves every morning for seven days and will be exempt from the legal requirement to quarantine at home every day they test negative, as long as they do not show any symptoms of Covid.

Lateral flow tests give results in about 30 minutes but are considered less sensitive than PCR (polymerase chain reaction) tests, which are processed in a laboratory with results returned in 24 hours or so.

What are the current self-isolation rules?

Between May 2020 and April 2021 in England, more than 6.7 million close contacts were reached and told to self-isolate, NHS Test and Trace data shows.

A large study of the test-and-trace system, published last month, found low numbers of people had followed the self-isolation rules in full.

Men, younger people and parents with young children were less likely to self-isolate – as were those from more working-class backgrounds, people in financial hardship and key workers.

Common reasons for not fully self-isolating included going to the shops or work, for a medical need, to care for a vulnerable person, to exercise or meet others – or because symptoms were only mild or getting better.

A step too far or a price worth paying?

The UK regulator has always cautioned against the use of lateral flow tests in this way.

The concern is that they are not accurate enough, certainly not when used at home to correctly identify enough positive cases.

So while they were given the green light for mass testing, which they are currently being used for on the basis they would pick up some cases that would not have been identified previously, deploying them to allow close contacts to avoid isolation was deemed a step too far.

But the vaccination programme has changed the equation by reducing the risk from Covid.

It means what is proportionate needs to be reassessed.

Asking people who come into close contact to isolate has a significant cost to that individual. Is that right when the risk of Covid is lower than it once was? And will people continue to isolate given the changing landscape?

Accepting some cases will slip through the net could be a price worth paying. This trial will help understand what that price is.

Prof Isabel Oliver, Public Health England’s national infection service director, said the study would be key to informing how “the approach to testing might evolve”.

“Self-isolation is very challenging for some people, particularly those who aren’t able to work form home or don’t have access to readily available support or help from others,” she told BBC Breakfast.

“If this allows us to return to greater normality, it would be a great step forward.”

She said the study needs to recruit such a large number of people, who will be invited as part of the contact tracing process, because infection rates are relatively low at the moment.

As well as the daily lateral flow test, study participants will take a more accurate PCR test at the beginning and end of the trial period.

They will also take a PCR test if any of the daily tests gives a positive result. And anyone testing positive will be required to self-isolate as normal during the trial.

Health Secretary Matt Hancock said: “This new pilot could help shift the dial in our favour by offering a viable alternative to self-isolation for people who are contacts of positive Covid-19 cases, and one that would allow people to carry on going to work and living their lives.”

GP Dr Ellie Cannon told BBC Breakfast it was “a really positive step because we haven’t been good at self-isolation”, often because people could not afford to take time off work.

She said many people also had to self-isolate unnecessarily, “which has really stopped life in the UK over the past year”.

While lateral flow tests are not as accurate as the PCR swabs used at testing centres, their use by schools to safely reopen has shown they can be effective, Dr Cannon said.

Prof Peter Openshaw, an immunologist who advises the government, said the tests were “contentious” but used daily, were likely to catch the people “most prone to spreading disease”.

Despite the progress in vaccination, he said “it is too early to declare victory and to drop our guard”.

“We do know that this infection has a tendency to come back again and we need to use this time to be absolutely sure we have got every precaution in place to stop further outbreaks,” he said.

Meanwhile, Mr Raab said he would “always look very carefully at any request” to help as India deals with its record surge of Covid cases, which is overwhelming hospitals.

But asked if the UK should pause the vaccination of younger, less vulnerable people to send doses abroad, the foreign secretary said he has not received any request from India “on that specific issue”.

He said the government was supporting vaccination worldwide with the billion doses that the UK is contributing to the World Health Organization’s Covax programme.

Shadow foreign secretary Lisa Nandy said the issue is “deeply personal” as she has a close family member in hospital with Covid in India, but added the UK should not pause the vaccination of younger people to send vaccines overseas.

“We haven’t defeated this virus in Britain yet,” she said. She said we should not “pit the people of Britain against the people of India” but should instead “dramatically ramp up vaccination and supply” worldwide.

On Saturday, a further seven deaths within 28 days of positive Covid tests were reported – and 1,907 more cases.