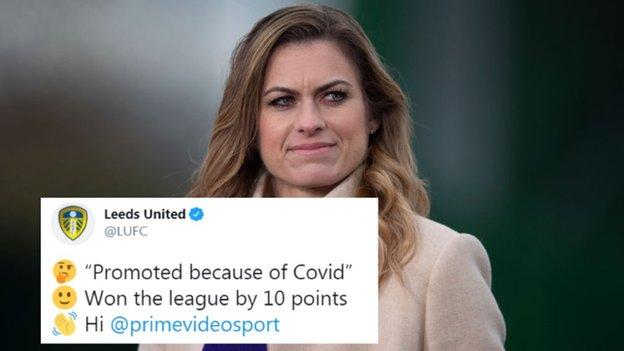 Karen Carney says the online abuse she has suffered has “changed” her and that social media companies “don’t understand” the impact it has.

Carney was the target of online abuse after a tweet by Leeds United questioned her comments as a pundit.

“The only way I could make them (social media companies) understand was to say ‘do you want another Caroline Flack on your hands?'” Carney told BT Sport.

Former Love Island presenter Flack, who took her own life aged 40 in February 2020, suffered online abuse and, during the December prior to her death, she wrote, ‘In a world where you can be anything, be kind,’ on Instagram.

“It’s definitely changed me, the impact it’s had on me. I’ve seen it with other pundits, I’m not just speaking about myself,” said Carney.

She made her comments during an Amazon Prime broadcast of Leeds’ 5-0 win over West Brom in the Premier League on 29 December.

“I came off air and got in the car and remember saying to the guy who drives us home ‘it’s kicking off’ and I felt physically sick,” said Carney, who won 144 England caps.

“I was sat the whole night, until three or four in the morning, in this daze. It was horrible.”

Football clubs, players, athletes and a number of sporting bodies are taking part in a four-day boycott of social media in an attempt to tackle abuse and discrimination on their platforms.

Carney added: “It was relentless. I can’t even describe it. People that know me know this is the job we do and choose to do it, but I’m low key, a simple girl who loves football.

“I don’t want to be bombarded on social media platforms. It wasn’t for one hour, it was for three or four days and now it still comes up, people still send me abuse.

“Recently I’ve been on a lot of government calls with the social media platforms – but they don’t understand.

“The people in charge of social media say ‘we’re doing this, doing that’ but they don’t understand, I’m just a number.”

If you are affected by the issues in this article, help and support is available at BBC Action Line.