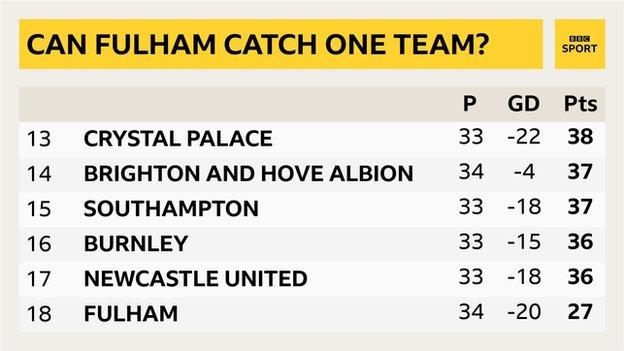 Fulham boss Scott Parker accepts he may be “living in cuckoo land” but still thinks his side can win their final four games and stay in the Premier League – but do the statistics back him up?

The Cottagers are on 27 points, nine points off safety, after a 2-0 defeat by Chelsea on Saturday.

“What I do know is that if we keep this level we have chance of beating Burnley, then beating Southampton, Manchester United and then Newcastle,” Parker said.

Three of their last four games are against the three teams directly above them in the table.

“I know we can win four games and that is our aim,” the Fulham boss continued. “It would be some escape, but we’ve seen it before.

“People will laugh at their screens and think I’m living in cuckoo land – maybe I am. But until that curtain comes down we will see.”

Can Fulham win four games in a row?

Fulham need to win their final four games to have any real hope – but they have only won five of their 34 Premier League games this season so far.

They have picked up only one point in their past six games – and have never won four Premier League games in a row.

The last time they won four consecutive games in the top flight was in April 1966 – they stayed up that season by two points.

Has any team ever stayed up in their position?

Three teams have stayed up after having 27 points (or fewer) with four games to go in the 38-game Premier League era.

Aston Villa last season were in that situation and survived with two wins and two draws.

Fulham themselves, in 2007-08, stayed up by winning their final three games in the same situation they are in now.

But crucially none of those sides picked up enough points to make them likely to survive this season. Villa ended on 35 with Fulham and Bradford on 36 each.

Burnley and Newcastle – in the two positions outside the drop zone – are on 36 points with five games each to play.

Will 39 points even be enough?

Usually 39 points would be enough to keep a team in the Premier League.

Only six times (across four seasons) have a team gone down with 39 or more points. There have been 36 times when teams have stayed up on 39 or fewer points (including West Ham and Villa last season).

But it may not be enough this season.

If Crystal Palace, Brighton and Southampton all win one of their final four or five games each (or draw three) – and Newcastle or Burnley pick up more than three points from their five games, Fulham cannot survive.

All of those teams play at least once before Fulham’s next game against Burnley.