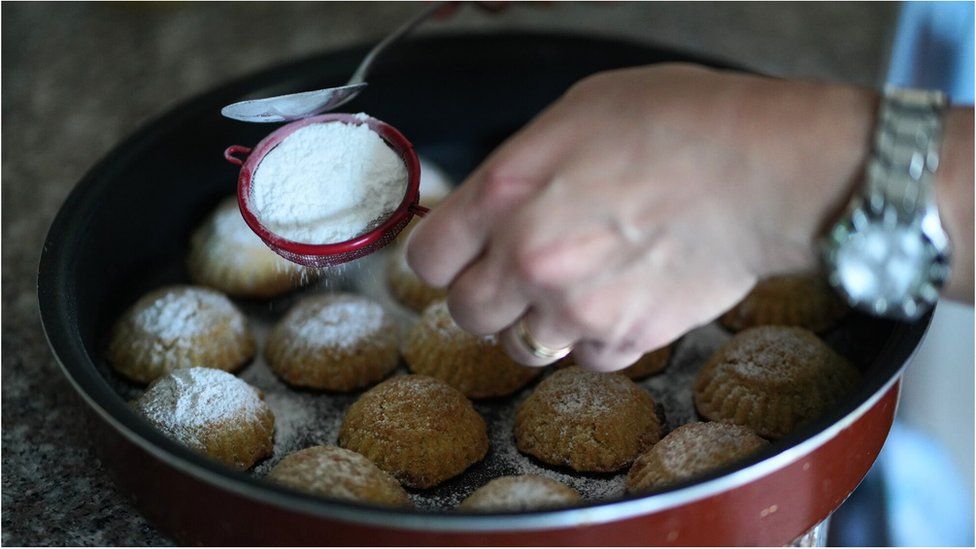 For Greek Orthodox Christians celebrating Easter, the tradition of making or buying maamoul biscuits plays a key role – but this year things are very different.

The Lebanese take pride in these confections. As well as Easter, they are made during Eid al-Fitr, at the end of Ramadan, and Muslims and Druze enjoy them for Eid al-Adha.

Rita Stambouli is Greek Orthodox and lives in Zahlé, a town about an hour’s drive east of Beirut in the Bekaa valley. When I visit, she is preparing her maamoul.

With a church sermon echoing across the red-roofed town, she puts a ball of date paste into a pocket of dough. She stuffs it into the mould and laughs as she whacks the wooden shape on the side. “We’re getting the stress out!’ she says, as a perfectly shaped maamoul pops out on her hand.

“We feel the poverty. Our situation has gone backwards. We’re not living like before,” she explains. “We get meat and chicken once a month.”

Rita works as a secretary at a hospital. Since the economic crash her salary, like that of all Lebanese, has been decreasing in value each month.

“I have two children. Both my husband and I work. We rent our house. And our income is not sufficient anymore,” she says.

Pistachios are Rita’s favourite filling but she can’t make maamoul with them this year. They are too expensive. She is also making much less maamoul than normal. She has replaced the ghee, a type of fat, with subsidised butter.

“The ghee is a third of my salary,” she remarks.

Food, like everything in Lebanon, has become extremely expensive. And it’s getting political.

In addition to rising prices, people’s money has lost considerable value. The banks have collapsed and people can’t get their savings out.

More and more Lebanese are turning to food banks. Even the Sawa for Development and Aid, a charity that predominantly supports Syrian refugees and vulnerable Lebanese, is being asked to help more families in the Bekaa Valley.

The situation is getting worse, and aid is being wasted by internal politics and disagreements.

In Tripoli, Lebanon’s second biggest city, a volunteer handing out food packages was shot dead when scuffles broke out, while in supermarkets people are fighting and throwing food at each other as they grab the subsidised products.

“I’ve witnessed a few fights,” says Rita. “There isn’t enough for everyone.”

There are fears subsides will run out very soon, and if they do, chaos will likely ensue.

As the country’s woes mount, political parties are taking their own measures.

Hezbollah, a Shia Islamist political and military organisation, has opened its own branch of supermarkets, al-Sajjad. It is providing its members and supporters with a card to purchase cheap and subsidised produce from Iran, Iraq and Syria, countries where it has a significant presence.

“These supermarkets are just for Hezbollah, and its supporters. I can’t benefit from this,” says Rita. “The government should do the same because we need to be able to eat.”

Meanwhile in Beirut, Joseph Tawk, a TV celebrity and ambassador for the non-governmental organisation Lebanon of Tomorrow, has been making 9,000 maamoul with his team over the last three days. They provide food and medicine across the country to those who need it, and have been distributing the biscuits.

“Maamoul isn’t going to save Lebanon,” Joseph laughs, “but they can save a smile for a day. Tomorrow it might be rice or a paracetamol box.”

With the country under a four-day lockdown against the spread of coronavirus, Orthodox Christians celebrating Easter and Muslims breaking their Ramadan fast with the iftar evening meal will sit down to enjoy the food they can afford.

Rita puts out her maamoul on the kitchen side to cool. They smell divine. She tells me this is the smell of Easter for her. Although she doesn’t have her favourite pistachio filling, she knows she’s lucky enough to make a small batch. Many families this year aren’t able to make any.