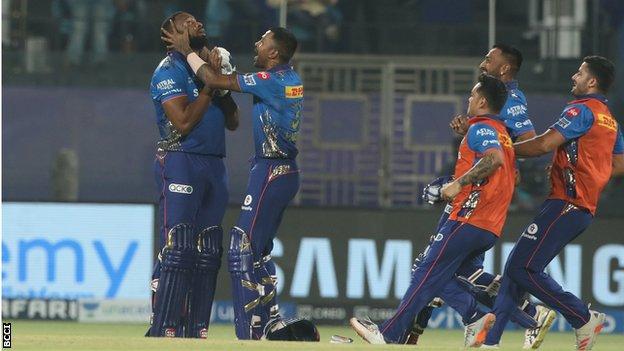 Kieron Pollard blasted 87 not out from 34 balls as Mumbai Indians completed a stunning chase of 219 against the Chennai Super Kings on the final ball.

The West Indian came in with 138 needed from 62 balls and hit eight sixes and six fours for a four-wicket win.

Mumbai needed 16 from the final over – and Pollard, dropped two overs earlier on 68, hit a six, two fours and scampered a two from the last ball.

It was the second highest chase in Indian Premier League history.

England all-rounder Moeen Ali had earlier hit 58 from 36 balls before Ambati Rayudu blasted a 27-ball 72 to lift top-of-the-table Chennai to 218-4.

“Probably one of the best T20 games I have ever been part of,” Mumbai captain Rohit Sharma said.

“I have never seen a chase like that before. One of the best innings, also, from Polly.”

Pollard said: “I was chomping to get in to see if I could hit a couple of sixes off the spinners firstly and then take it from there.

“I only got two overs against spin and I had to maximise that over against Jadeja.”

How the chase unfolded

He continued to clear the boundary with ease and reached his fifty from just 17 balls.

With 34 needed from 14, Faf du Plessis dropped a relatively straightforward chance to dismiss Pollard at long-on which proved crucial.

England all-rounder Sam Curran, who took 3-34, bowled the penultimate over and was hit for two sixes by Hardik Pandya before having the India batsman caught at long-off and Jimmy Neesham caught at fine leg.

It left South Africa bowler Lungi Ngidi 16 to defend but Pollard turned down a single from the first ball, hit two leg-side fours, swiped a full toss over square leg for six and then got enough bat on a yorker on the final ball.