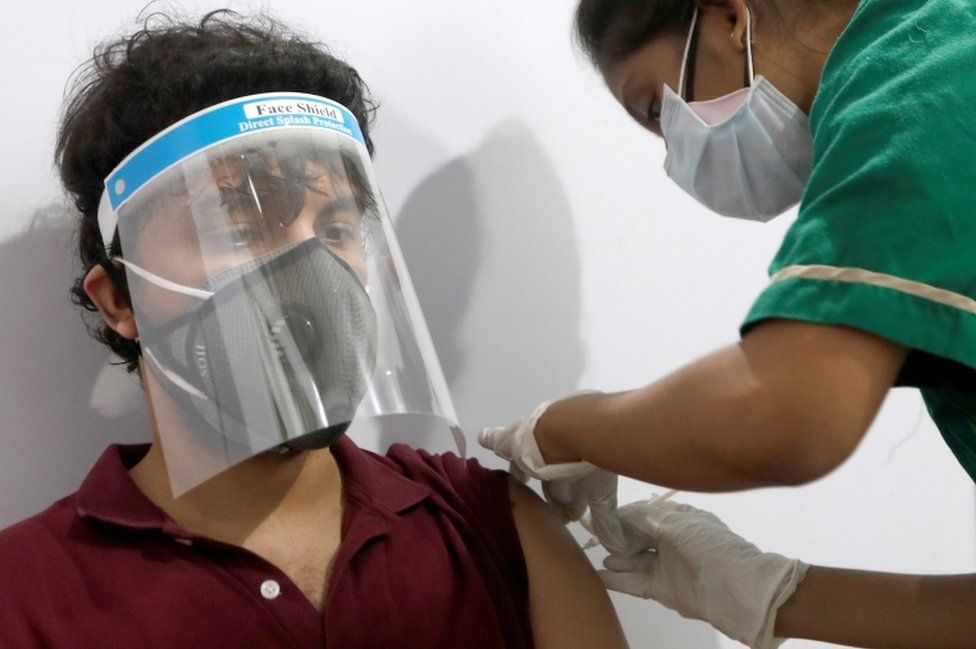 India has recorded its highest daily coronavirus death toll since the pandemic began – a day after it became the first country to see more than 400,000 new cases.

Its health ministry said 3,689 people had died within the past 24 hours.

Hospitals are battling to treat patients amid a chronic shortage of beds and medical oxygen.

Distressing images of families begging for hospital beds and life-saving supplies have been emerging for more than 10 days, while morgues and crematoriums remain overwhelmed.

Amid the crisis, vote counting started on Sunday for elections held in five states in March and April.

The outcomes will be watched for signs of how the pandemic has affected support for Mr Modi and his Hindu nationalist BJP party.

On Saturday, 12 people died at Delhi’s Batra Hospital after it ran out of oxygen – for the second time in a week.

The Times of India newspaper reported 16 deaths in the southern state of Andhra Pradesh due to oxygen shortages in two hospitals, and six in the Delhi suburb of Gurgaon.

Delhi High Court has now declared it will start punishing officials if life-saving supplies don’t make it to hospitals.

“Water has gone above the head. Enough is Enough,” said Justices Vipin Sanghi and Rekha Patil.

Experts have warned that India’s official death toll is a significant under-count. They have cited low testing rates and the number of people dying at home, especially in rural areas.

How is India doing on vaccination?

All adults in India are now eligible for a coronavirus vaccine. But the planned launch of a nationwide drive on Saturday faltered as several states said they did not have enough doses to start vaccinating those aged 18-44.

Despite being the world’s biggest producer of vaccines, the country is suffering an internal shortage and has placed a temporary hold on all exports of AstraZeneca to meet domestic demand.

The Health Ministry said on Sunday that 84,599 people in the age bracket had been given a first dose of the coronavirus vaccine.

India has been using two vaccines – the Oxford-AstraZeneca jab (known locally as Covishield) and another made by Indian firm Bharat Biotech (Covaxin). The Russian-made Sputnik V vaccine has also been approved for use, and the first 150,000 doses arrived on Saturday.

What are other countries doing to help?

Countries worldwide have sent a flood of emergency medical supplies. As of Thursday, 40 nations had sent shipments.

The first of several planes from the US carrying oxygen cylinders, N95 masks and rapid diagnostic tests arrived in Delhi on Friday.

“The bond between the oldest democracy & the largest one keeps getting fortified,” India’s health ministry tweeted.

The US had previously been criticised for imposing a ban on sending raw materials for vaccines abroad, which limited India’s ability to make more of the AstraZeneca jab. The measure was lifted last week.

A German military aircraft with 120 ventilators reached India on Saturday, and the UK’s Foreign Secretary Dominic Raab confirmed on Sunday that the country would send more ventilators “very shortly”.

Why isn’t India in full lockdown?

The central government is reluctant to impose a national lockdown, which the prime minister has called a “last resort”. Senior leaders fear the economic impact, after last year’s lockdown saw India’s output fall by a record 24% in April-June compared to a year earlier.

The human cost could also be severe. Last year’s 68-day national lockdown saw millions of India’s migrant workers make arduous journeys back to their home villages after they found themselves unemployed and running out of money.

The poor, especially undernourished children and pregnant women who rely on government programmes, found it difficult to access benefits. Immunisation programs were halted, and those suffering from serious illnesses struggled to access crucial health services.

But several states and union territories do have restrictions in place.

Odisha was the latest to announce a two-week lockdown, to run from 5-19 May, joining hard-hit Delhi, Maharashtra, Karnataka and West Bengal.

Other states, including populous Uttar Pradesh, have either night curfews or weekend lockdowns.

The Indian Express newspaper reports that India’s Covid-19 taskforce, which advises the government, is pushing hard for a nationwide lockdown to help subdue the devastating second wave.

Dr Anthony Fauci, the top US infectious disease expert, said on Saturday that an “immediate” shutdown for a “few weeks” could break the chain of transmission in India.

Mr Modi has been criticised for allowing millions of people to gather for religious festivals and huge political rallies in March and April, with minimal social distancing and very little mask-wearing.