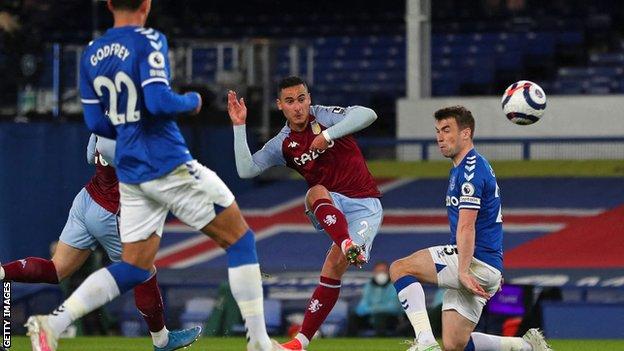 Everton boss Carlo Ancelotti says his side missed a big opportunity to stay in contention for a finish in the European places as the Toffees lost at home to Aston Villa.

Anwar El Ghazi’s superb second-half strike secured victory for the visitors and dealt a significant blow to Everton’s chances of finishing in the top four of the Premier League.

El Ghazi curled home from the edge of the box with 10 minutes remaining to secure Villa only their third win in their last 11 league games.

Everton had started the day six points off the top four but this defeat, coupled with a win for Chelsea, means they are now nine points adrift of Thomas Tuchel’s side.

“We lost a big opportunity to stay in the fight,” Ancelotti told BBC Sport. “We’re still in the fight but with less possibility and more difficulties.

“We didn’t start the game as well as this kind of game demands. It was an important game and would have been an important result.”

El Ghazi’s winner was the only highlight of a relatively flat second half that failed to build on a pulsating first.

Ollie Watkins opened the scoring when he pounced on a mistake by Mason Holgate before slotting past Jordan Pickford.

However, Everton hit back soon after when Dominic Calvert-Lewin powered home a header following a corner.

Home keeper Pickford then twice denied Watkins with excellent saves to keep Villa at bay, while ex-Everton midfielder Ross Barkley struck the post with a low effort from range.

But despite Pickford’s best efforts Villa secured the three points when El Ghazi struck late on.

The defeat leaves Everton eighth on 52 points while Villa are four points behind in ninth.

To have still been in the conversation for a top-four finish at this stage of the season is impressive for Everton, but the Toffees will perhaps wonder what might have been if their home form had been just marginally better than it is.

The Toffees have collected just 19 points from 17 home matches, with eight of those games ending in defeat.

“The away run we have is also unbelievable. The home run has affected us in the table. I hope it doesn’t affect us in the end.”

After such an impressive win at Arsenal last time out, Everton never really got going against a Villa side that looked hungrier for the victory from the outset.

Indeed, the visitors could have won by a bigger margin but for some excellent saves by Pickford.

He came off his line quickly to prevent Watkins from adding a second not long after opening the scoring, and produced a stunning save to somehow deny the striker again at the back post.

It was arguably Pickford’s best performance of the season and bodes well for England with the European Championship starting in just over a month.

Another player with European Championship aspirations is Villa striker Watkins, and this performance will have done his chances of convincing Gareth Southgate to make a place for him in his squad no harm.

The England boss was watching in the stands as Watkins took his tally in an excellent debut Premier League season to 13 goals, and he could easily have added a couple more to that total.

But aside from his goals, Watkins offers impressive work-rate in attack and he was a constant menace for Everton with his pressing from the front.

He was there to steal the ball from a hesitant Holgate to open the scoring and, for a 20-minute period in the first half, the Toffees were unable to get a handle on his determined runs off the ball.

It was another impressive display from the former Brentford striker and with games against Manchester United, Tottenham and Chelsea still to come, Watkins has plenty more chances to further underline his credentials to Southgate.

“I thought he was good and difficult to handle. It’s what we paid a lot of money for,” Smith said of his £28m summer signing from Brentford.

“I knew what he was and what he was like as a person, and how he wanted to grow and get better. I thought he was outstanding tonight.”

Woodwork woes for Villa – the stats

Everton travel to fifth-placed West Ham on Sunday, 9 May (16:30 BST) while Aston Villa are at home to Manchester United on the same day (14:05 BST).