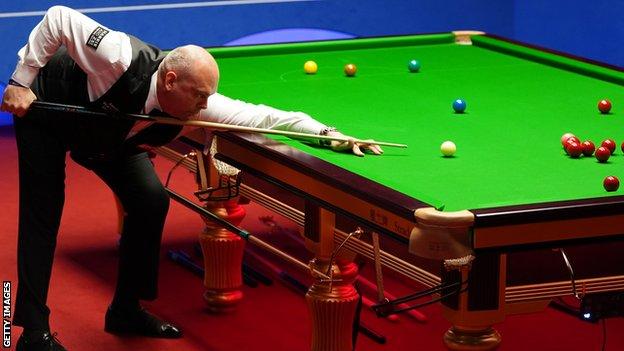 Stuart Bingham produced a string of big breaks to turn his World Championship semi-final with Mark Selby on its head.

Selby dug in to take the next two but a 63 break earned Bingham a 13-11 overnight lead going into Saturday’s final session at 14:30 BST.

Kyren Wilson leads Shaun Murphy 10-6 in the other best-of-33 semi-final.

Wilson, 29, maintained his four-frame advantage during Friday’s afternoon session but Murphy produced an important late rally to keep himself in touch.

Last year’s losing finalist Wilson shook off the blow of losing a bizarre frame in which he conceded 53 penalty points to stretch his overnight 6-2 lead to 10-4 with a top run of 131.

Bingham gets the better of steely Selby

Bingham began the evening session in blistering fashion, hitting a 131 clearance in the opening frame to halve his deficit before missing the 13th red on a maximum attempt as he levelled matters with a 96.

The following frame, at 63 minutes the longest in the tournament, proved pivotal as Selby broke down on 52 and Bingham nudged ahead, pinching it on the black after an outrageous fluke on the final pink.

The 2015 champion, nicknamed ‘Ballrun’ by his peers on the circuit because of his perceived run of the ball, took full advantage of his good fortune with decisive contributions of 78 and 68 to move 12-9 ahead.

However, Selby stretched out the 21st frame by playing for snookers for almost 20 minutes and that, combined with two re-racks at the outset of the following frame, appeared to disrupt Bingham’s rhythm.

Three-time champion Selby, 37, won that frame and the next to pull back within one thanks to runs of 62 and 51 but Bingham eventually sealed a lengthy final frame of the evening not long before midnight.

Mark Selby still has a mountain to climb but when Stuart won those five frames in a row, we thought it was done, so he has given himself a chance.

It was a great session of snooker from Stuart Bingham but Selby is still in it and anything can happen tomorrow – it’s a different day.

Both all-English encounters went to and fro throughout the day, although Wilson appeared to be well on course for the final when he opened up a six-frame gap on Murphy despite an inexplicable aberration.

After extending his healthy overnight advantage to 7-2 with a break of 69 in the day’s opener, Wilson was immediately pegged back in one of the strangest frames the Crucible has witnessed in some time.

Trapped in a snooker behind the blue in baulk, with five reds remaining, he failed with eight escape attempts, hitting the black on seven occasions to virtually hand the frame to Murphy, to the gasps of the audience.

He knocked in a long red right at the start of the next frame on his way to making it 8-3 and although Murphy pulled one back with an 88 break, Wilson won the following two, aided by a 131 total clearance in the 14th.

However, 2005 champion and two-time runner-up Murphy upped his game in the session’s final two frames, celebrating animatedly after an exhibition black at the end, to set up an interesting third session on Saturday morning (10:00 BST).