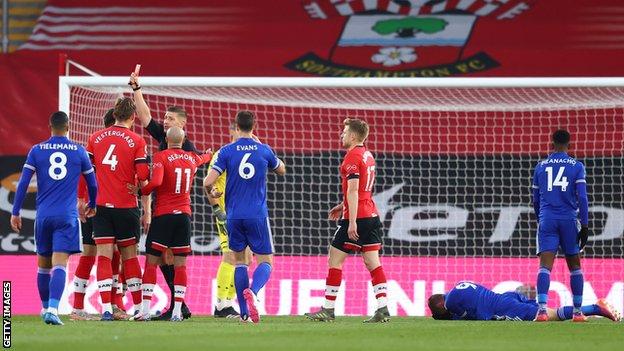 Southampton held Leicester to a draw despite playing more than 80 minutes with 10 men to frustrate the Foxes in their push to clinch a top-four finish.

Jannick Vestergaard was controversially sent off after just 10 minutes when his tackle on Jamie Vardy was deemed to have denied the Leicester striker a goal-scoring opportunity.

Vestergaard, on the edge of his box and the last defender, got the ball with a lunging tackle but referee Robert Jones deemed his follow-through on to Vardy’s ankle had prevented the striker running in on goal.

That decision set the game’s pattern, Leicester probing while Southampton defended deep, but it was the Saints who took the lead in the 61st minute.

James Ward-Prowse scored from the penalty spot after Kelechi Iheanacho had blocked Stuart Armstrong’s effort with his arm raised up by his head.

The point takes Leicester eight points clear of fifth-placed West Ham having played a game more but they have a difficult end of the season to come.

Southampton edge 10 points clear of the relegation zone as they close in on guaranteeing their safety.

The point takes Leicester closer to their goal of securing Champions League football next season but, having played against 10 men for so long, they should have ended the night with a 10-point cushion over fifth place.

Wilfried Ndidi dragged a shot wide from the edge of the box and Iheanacho came agonisingly close to meeting Marc Albrighton’s cross in the closing stages.

Before Evans’ equaliser, however, they had had created little despite dominating possession.

With Southampton in a defensive mindset visiting manager Brendan Rodgers replaced defender Wesley Fofana with forward Ayoze Perez at half-time but many of his side’s 22 shots came from long distance.

It was Iheanacho, who has been Leicester’s star in attack with 12 goals in nine games, who foolishly closed down Armstrong’s shot with his arm raised for Southampton’s penalty. He did at least redeem himself with a fine left-footed cross for Evans’ equaliser.

Leicester are still in a fantastic position for a top-four finish but their slump at the end of last season, plus the fact they have trips to Manchester United and Chelsea to come as well as a game against Tottenham on the final day, means Champions League qualification is not yet certain.

For Southampton this was a morale-boosting result coming in a difficult run that had seen them lose 12 of their past 15 games.

After the early loss of Vestergaard some might have feared a repeat of the 9-0 loss to Manchester United earlier this season when they went a man down early – or the defeat by Leicester last season by the same scoreline.

Instead, they produced an admirable defensive display that left manager Ralph Hasenhuttl visibly pleased at full-time.

Vestergaard made a mistake with an initial loose touch but his dismissal was harsh.

It was deemed by referee Jones that his follow-through had prevented Vardy running on to the deflected ball, a decision confirmed by the video assistant referee, but Vestergaard’s touch had diverted it back towards goalkeeper McCarthy, who said afterwards he thought he would have reached the ball first.

‘Not a red card’ – manager reaction

Southampton boss Ralph Hasenhuttl to BBC Sport: “Big credit. We can discuss the red card and for me how we bounced back was amazing. They had 80 minutes to score against us. The goal we conceded, but the rest was really well defended around the box.

“Jannik Vestergaard has a bad touch and then plays the ball back to the keeper. The official explanation was it was 100% goal chance – for me Jamie Vardy never had the ball because the keeper was there. Maybe a foul because he caught him after but not a red card.”

Leicester manager Brendan Rodgers to BBC Sport: “It’s a point towards where we want to go. The speed of our game wasn’t at the level until we went behind in the game.

“When the opposition go down to 10 men we’re normally good in those situations but you have to credit Southampton to show that resilience and to keep us out. Jamie Vardy is a warrior so he got up and Alex McCarthy made a great save from him.”

Leicester host Newcastle on Friday 7 May in their next game (20:00 BST) – on paper the easiest of their remaining fixtures.

Southampton travel to Liverpool on Saturday 8 May (20:15 BST).