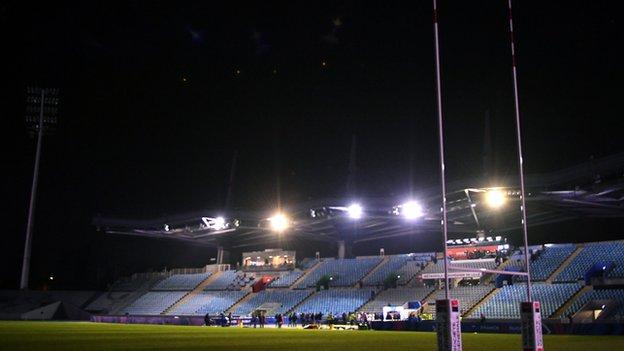 England captain Sarah Hunter says she has “never experienced anything like” the moment her side’s game in France was called off when floodlights failed.

“It’s a bit of an anti-climax obviously,” Hunter said.

“I’ve never experienced anything like that. Maybe at training with your club but never in an international game.”

When asked if she felt the incident was something that would happen at a men’s game, Hunter responded: “I’m not sure it is a comparison to make.

“We don’t know why the lights went out so I don’t think you can compare it to the men because they could have been playing here and the same thing could have happened.”

England claimed a third Six Nations title in a row last weekend after playing a shortened version of the tournament format because of disruption caused by coronavirus.

“Just when you think the year can’t get any more bizarre,” he said.

“The first question I asked was whether it was a blackout curfew and they haven’t got the memo that there was an international game on.”

The victory was England’s ninth in a row against France and meant the Red Roses avoided losing their spot at the top of the world rankings to New Zealand.

The Black Ferns – who will host the postponed World Cup next year – have not played for 18 months but could have taken England’s place as world number ones if the Red Roses had failed to win in France.

Middleton said: “Considering that if we hadn’t won for some bizarre reason it would have meant New Zealand overtook us at the top of the world rankings without playing a game for 18 months – which I think is absurd – getting the win is fantastic for us because it keeps us number one.”

Despite the win, it was a disappointing evening for England replacements Flo Robinson and Merryn Doidge, who had been poised to make their international debuts when the lights went out.

“There were two young girls due to get their first cap,” Hunter said.

“We know how special these days are and the build-up to it so there is a lot of feeling for the rest of the team that did not get the opportunity to get on and be involved in victory.”

There were plenty of positives to take away from England’s performance, most notably the incredible individual efforts of wing Abby Dow.

The 23-year-old single-handedly helped England to the lead in the first half as she flew down the pitch for two eye-catching tries.

Dow had missed England’s opening Six Nations match following the death of her father and Middleton was full of respect for the wing.

“Given the couple of weeks Abby Dow has had, I don’t think you can praise her high enough,” he said.

“The mental strength she has shown and the commitment to playing for England and also to her family is incredible.”