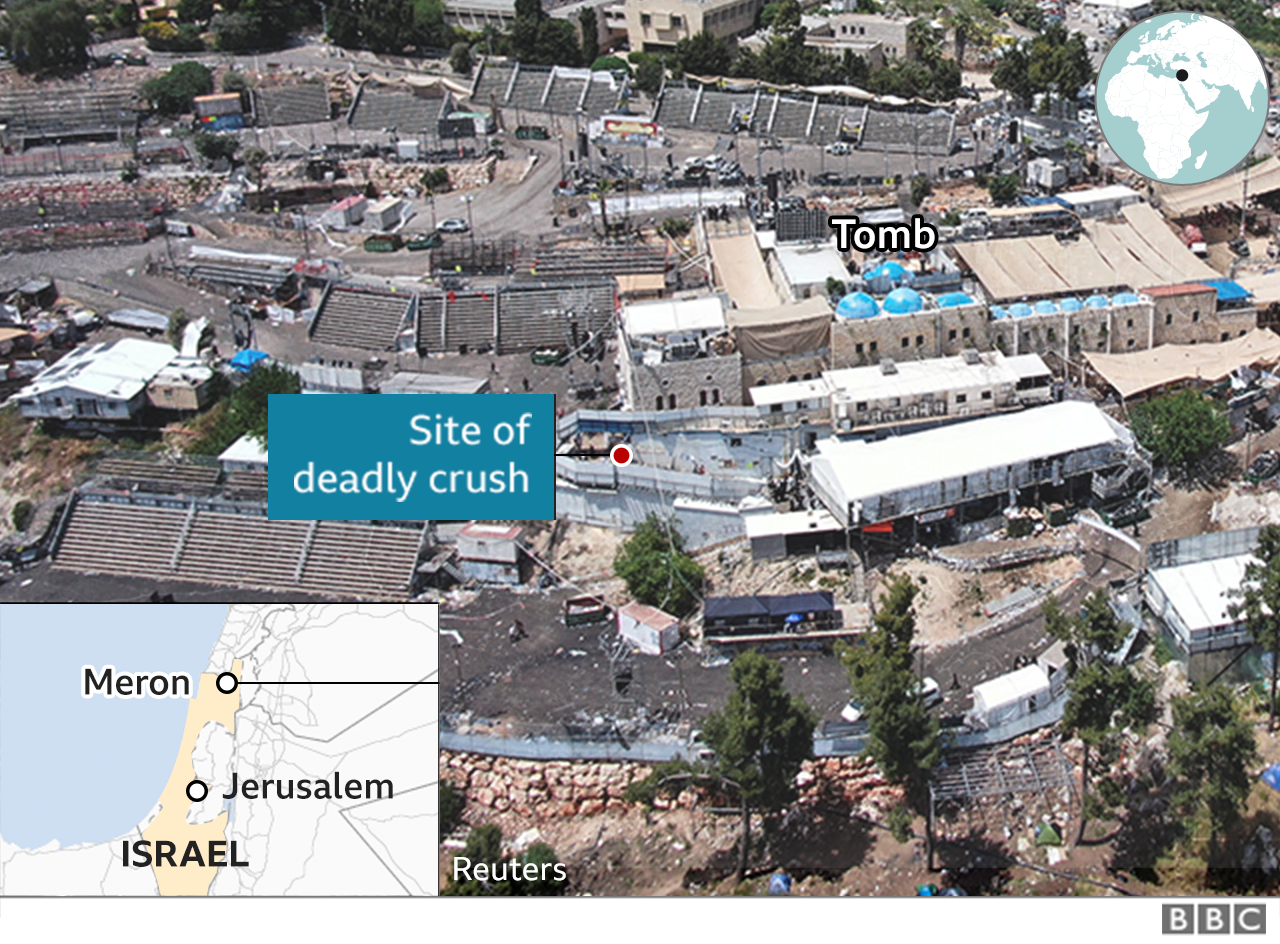 The bodies of 32 people killed in a stampede at a Jewish pilgrimage site have been identified in Israel.

At least 45 people died in the crush at the Lag B’Omer festival, near Mount Meron, when they became trapped in an overcrowded passageway. Some 150 people were injured.

The identification process was paused for 24 hours late on Friday to mark the Sabbath, the Jewish day of rest.

Work is expected to resume after sunset on Saturday, which ends the Sabbath.

So far, 22 bodies have been released for burial.

Those who died are believed to be predominantly men or boys from the ultra-Orthodox community as the crush at the largely gender-segregated event happened in one of the men’s sections.

Some victims are believed to be foreign nationals, including several US citizens.

UK-based site Jewish News reported that a 24-year-old from Manchester in England was also among the dead, naming him as Moshe Bergman.

“We are working hard, but you have to understand that this is a complex and sensitive process,” said Dr Chen Kugel, director of the National Center of Forensic Medicine.

He said the work must be done “responsibly” to avoid errors.

Prime Minister Benjamin Netanyahu visited the scene, and promised that an inquiry would ensure such a tragedy did not happen again.

He said it was one of Israel’s worst peacetime disasters.

One survivor who gave his name as David told Ynet news it had felt like a human wave had broken: “Our bodies were swept along by themselves. People were thrown up in the air – others were crushed on the ground.”

Medics struggled to reach the injured in the ensuing chaos.

Sunday has been declared a national day of mourning in Israel.

What do we know about the victims?

The bodies of those killed were taken to the Greenberg Institute of Forensic Medicine in Tel Aviv.

One of the first funerals to be reported was that of Rabbi Elazar Goldberg, who was in his late thirties.

Mourners in Jerusalem wept and prayed as the body covered in a white sheet was moved into the back of a vehicle ahead of burial.

Two of the youngest victims were brothers Moshe Natan Englander, 14, and Yehoshua Englander, 9, from Jerusalem.

At least two of the dead are US citizens from New York, Congressman Mondaire Jones confirmed in a tweet.

“This is the time to hug the families and to help them find their loved ones – to cry together,” he said. “This is a hard and painful day. This tragedy is heartbreaking.”

How did the disaster happen?

The site includes several large gathering grounds with open-air stands and stages, connected by a network of paths. It was along one of those paths where witnesses said the crush of people began at around 01:00 local time (22:00 GMT Thursday).

Some witnesses said the incident had begun when police closed the passageway, said to be 3m (10ft) wide. Police sources told Haaretz newspaper some people had slipped on steps, causing dozens more to fall over. This was not officially confirmed.

An injured man lying on a hospital bed said a line of people in the front of the surging crowd had simply collapsed.

“A pyramid of one on top of another was formed,” the unnamed man was quoted as saying by Reuters news agency. “People were piling up one on top of the other. I was in the second row. The people in the first row – I saw people die in front of my eyes.”

Dov Maisel, director of operations for volunteer-based emergency services organisation United Hatzalah, told the BBC he had never witnessed such a scene in his 30-year career.

“It felt like a surreal scene where we had over 20 people undergoing CPR by our teams, with limited ability to evacuate from the scene, simply because the place was too overwhelmed with people,” he said.

Israel’s state watchdog, the State Comptroller’s office, issued warnings in 2008 and 2011 of the risk of a disaster.

Special danger was posed by access roads and paths which “are narrow and not appropriate to accommodate the hundreds of thousands of people who visit the site”, the office was quoted as saying by the New York Times.

What was different this year was that bonfire areas were partitioned off as a Covid-19 precaution and this may have created unexpected choke-points for foot traffic, Reuters reports, quoting Israeli media.

Thousands of police officers closed down the event after the crush before helping evacuate attendees.

How did the police respond?

Investigators will look into whether there was any police misconduct, the justice ministry said.

Regional police chief Shimon Lavi told reporters at the scene he took upon himself “the overall responsibility, for good and for bad” and was “ready for every inspection”.

He later told AFP news agency his officers had done all they could on a “tragic night”. Other police officials told local media people had slipped in the walkway and the crush had been “out of their control”.

US President Joe Biden called Prime Minister Netanyahu to offer his condolences. UK Prime Minister Boris Johnson said his thoughts were with “the Israeli people and those who have lost loved ones in this tragedy” and German Chancellor Angela and offered her “heartfelt sympathies”.