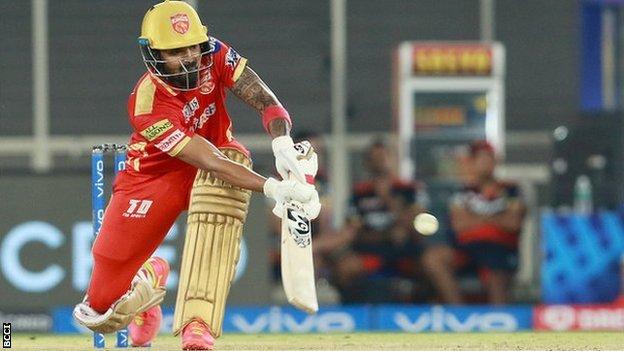 The Punjab captain hit seven boundaries and five sixes as his side made 179-5.

In reply, RCB only managed 145-8 with spinner Harpreet Brar taking a superb 3-19 – dismissing Virat Kohli for 35, Glenn Maxwell for a golden duck and AB de Villiers for three.

The win takes Punjab to fifth in the table, while RCB stay in third place.

Having been put into bat, Punjab Kings lost an early wicket as opener Prabhsimran Singh was dismissed by Kyle Jamieson for seven.

Rahul and Chris Gayle then took to the RCB attack. Veteran Gayle, 41, hit Jamieson for five boundaries in the sixth over.

Gayle’s knock of 46 from 24 balls – and the 80-run partnership with Rahul – came to an end after he was caught behind off the bowling of Daniel Sams.

But Rahul continued to punish the RCB bowlers and shared an unbeaten 51-run partnership with Brar (25 not out) for the seventh wicket.

Brar – playing his first IPL game of the season and fourth overall since making his debut in 2019 – then starred with the ball to take three key RCB wickets.

Kohli’s 34-ball innings ended with one which kept low and clattered into the stumps before Maxwell was bowled first ball by a brilliant delivery which turned and clipped the bails.