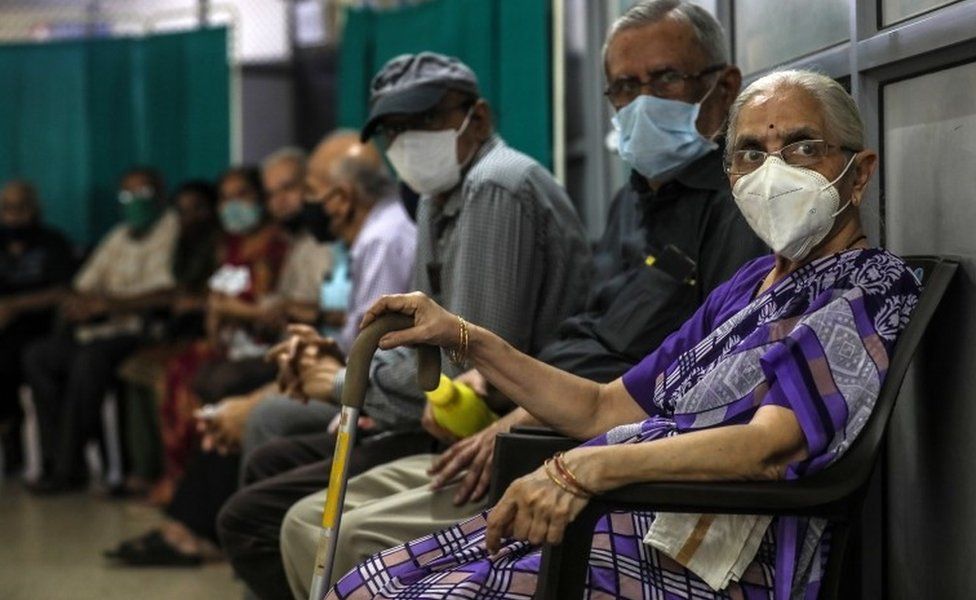 India is due to begin vaccinating all adults over the age of 18 amid a deadly second wave of infections.

But a number of states say they won’t be able to provide the jabs because they don’t have enough doses.

India’s vaccination drive is in a crisis at a time when the country’s healthcare system is overwhelmed with more than 300,000 cases and over 3,000 deaths being reported daily.

The country has so far administered more than 150 million doses of two coronavirus vaccines in what is the world’s largest vaccination drive.

One vaccine is developed by AstraZeneca with Oxford University (Covishield) and the other by Indian firm Bharat Biotech (Covaxin).

Despite a promising start in January, the vaccine drive has been lagging. And the decision to expand it to the biggest cohort of the country’s population – 18 to 45 year-olds – comes even as several states report a shortage of doses.

More than 13 million people in this age group have already registered for the doses, but a number of states have stated they would not be able to start giving jabs from 1 May.

Delhi Chief Minister Arvind Kejriwal asked people not to queue up for jabs as the Indian capital had not received doses yet.

“As soon as vaccines arrive we will let you know, then you can come for shots. We appeal to you not to crowd vaccine centres in the next few days,” Mr Kejriwal said.

“Many across the country have registered for vaccines but we have not received stocks. We are in regular touch with companies and we hope to get the vaccines in a day or two.”

The central state of Madhya Pradesh, ruled by the BJP, has announced that it would not be able to begin giving doses to adults above 18 because the vaccine makers were not able to provide the doses.

“So the drive won’t start on 1 May,” Shivraj Singh Chouhan, the chief minister of the state, said in message.

Maharashtra, a western state badly hit by the second wave of the virus, has said it would not begin mass vaccination because the state had a “small” stock of doses.

Since the pandemic began, India has confirmed more than 18 million cases and over 200,000 deaths. It has the second-highest number of Covid-19 infections in the world after the United States.

But experts say India is unlikely to meet its target of covering 250 million people by July, especially as cases continue to surge.

India launched its vaccination drive on 16 January, restricting it to healthcare workers and frontline staff – a sanitation worker became the first Indian to receive the vaccine. The drive gradually expanded to other age groups – from 1 May, those above 18 years will be the latest group to become eligible.

There are no plans yet to vaccinate pregnant woman and children.

In early April, India declared that it was “the fastest country in the world” to give more than 100 million jabs. It achieved the feat in 85 days, whereas the US took 89 days and China 102 days, the health ministry said.

But shortages have badly hurt the vaccine drive in many states with second doses being deferred.

The Economic Times newspaper said the vaccine drive had “crumbled and left a country in chaos”.

The two vaccines being administered now were approved in January. In April, a third vaccine – Russia’s Sputnik V – was approved for use. There have been global concerns about Sputnik .Several other candidates are at different stages of trials.

India placed a temporary hold on all exports of AstraZeneca to meet domestic demand but the vaccine’s maker, Serum Institute of India (SII), recently said its production capacity was “very stressed” and that it was “still short of being able to supply to every Indian”.

The federal government has since cleared the way for an “advance payment” of 4,500 crore rupees ($610m; £435m) to Bharat Biotech and SII to boost their supply, and allowed the two vaccine makers to sell half of their doses directly to states, private hospitals and companies.

Experts believe India should ramp up vaccination in areas of high transmission and in five states where elections are being held.

Bhramar Mukherjee, a biostatistician at the University of Michigan, told the BBC that India needed to administer 10 million shots daily “instead of being complacent with three million” doses a day.

How does India manage such a huge vaccine drive?

For decades now, the country has been running one of the world’s largest immunisation programmes that vaccinate tens of millions, including newborns and pregnant women, against various diseases.

Many of the poor have little information on how to register themselves and access the vaccine free of cost. Eligible people can book their jabs online or walk in and register at vaccination centres.

Vaccination is voluntary. State-run clinics and hospitals are offering free jabs, but people can also pay 250 rupees ($3.4; £2.4) a dose at private facilities.

From 11 April, the government allowed people to get paid jabs at private and state-run workplaces.

The government is spending around $5bn to provide free doses at state-run clinics, public health centres and hospitals.

People can experience side effects from vaccines.

India has a 34-year-old surveillance programme for monitoring “adverse events” following immunisation. Experts say a failure to transparently report such incidents could lead to fear-mongering around vaccines.

India has so far reported 18,904, “adverse events” after vaccination. Most of these events were “minor” – anxiety, vertigo, giddiness, dizziness, fever, and pain – and all patients had recovered, the government said.

The surveillance programme has examined 617 cases of “severe adverse events”, including 180 deaths after vaccination until March, according to reports.