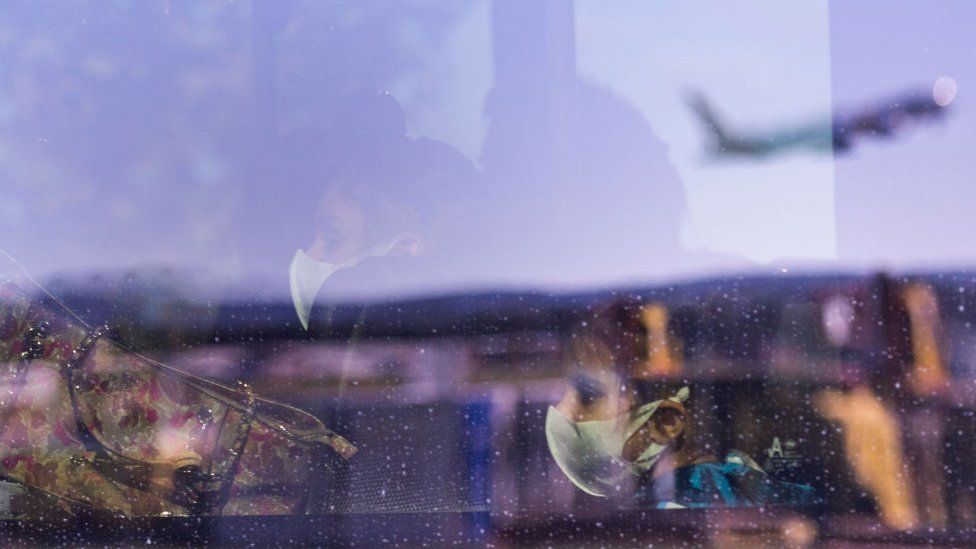 Australian citizens returning home from India could face up to five years in jail and fines after the government made the journey temporarily illegal.

The health ministry said the ruling had been made “based on the proportion of people in quarantine who have acquired a Covid-19 infection in India”.

Earlier this week, Australia banned all flights from India.

There are an estimated 9,000 Australians in India, 600 of whom are classed as vulnerable.

One doctor told Australian TV that the government’s move was disproportionate to the threat posed by those returning from India.

“Our families are quite literally dying in India overseas… to have absolutely no way of getting them out – this is abandonment,” GP and health commentator Dr Vyom Sharmer said.

From Monday, anyone who has been in India within 14 days of their intended arrival date in Australia will be banned from entering the country.

Failing to comply with the new ruling could result in a five-year jail sentence, an A$66,000 (£37,000) fine, or both. The decision will be reviewed on 15 May, the health ministry said.

“The government does not make these decisions lightly,” Health Minister Greg Hunt said in the statement.

“However, it is critical the integrity of the Australian public health and quarantine systems is protected and the number of Covid-19 cases in quarantine facilities is reduced to a manageable level.”

An erosion of rights

There’s an inscription inside the front jacket of every Australian passport. It calls for protection and assistance for citizens when they’re in strife abroad.

“The Commonwealth of Australia… requests all those whom it may concern to allow the bearer, an Australian citizen, to pass freely without let or hindrance and to afford him or her every assistance and protection of which he or she may stand in need.”

Who would have thought that Australians are now struggling to “pass freely” back into their own country? Re-entering and living in your nation is a basic aspect of citizenship. A right of return is recognised in international law, enshrined in the Universal Declaration of Human Rights.

But the problem for stranded Australians is that you can’t argue a UN treaty in an Australian court. Citizenship rights – and many other freedoms – aren’t guaranteed under their law. Australia is one of the few Western nations lacking a human rights charter or explicit protections in its constitution.

So in an emergency situation, the government can make something a criminal offence overnight. At the height of the pandemic last year, the government beefed up its Biosecurity Act to give the heath minister near unconditional powers bypassing parliament.

That’s why citizens now trying to flee a danger zone can face jail for trying to come home. A legal challenge to this two-week ban will take time and be costly – public outrage and pressure may be the only effective remedy.

The ministry said it had agreed with India to send emergency medical supplies, including ventilators and personal protective equipment.

“Our hearts go out to the people of India – and our Indian-Australian community,” the statement added.

Australia has implemented a series of strict measures to keep the virus out of the country since the pandemic began in February 2020. While the country is enjoying near zero infections rates and has had far fewer fatalities than most countries, the strict lockdown policies have left many Australians stranded overseas.

The ban on Indian arrivals this week has marked an escalation – the first time the country has stopped evacuations and blocked citizens from returning home altogether. It has intensified calls for more to be done to get Australians home.