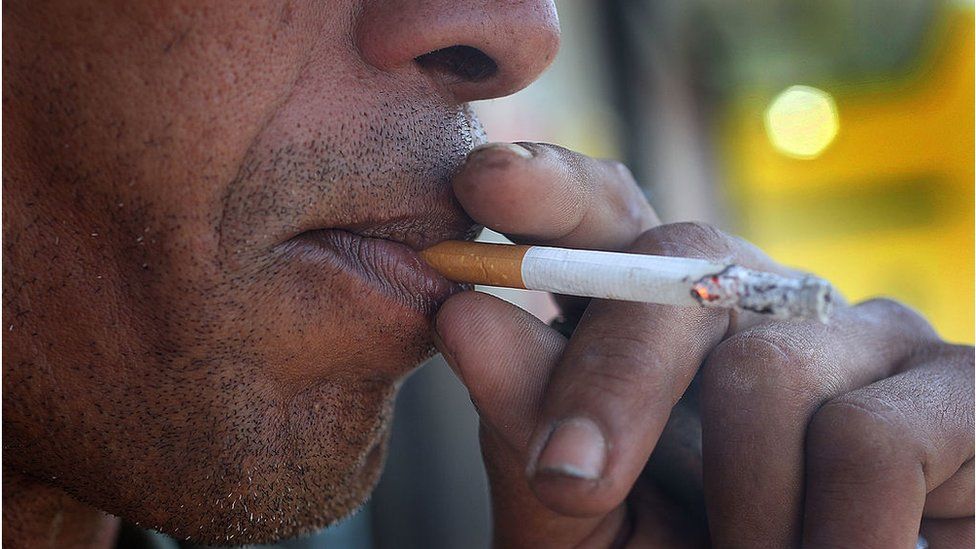 In a major blow to the tobacco industry, the US Food and Drug Administration (FDA) has moved to ban the sale of mint-flavoured cigarettes.

Public health and civil rights groups have lobbied vigorously for the ban, citing the disproportionate harms of menthol cigarettes on black Americans.

But critics fear prohibition could give rise to a black market, and more fatal encounters with law enforcement.

The proposed ban would affect more than a third of US cigarette purchases.

A final decision though will take months – and possibly years – to implement.

The FDA’s announcement on Thursday marked the agency’s deadline to respond to a federal lawsuit from public health groups seeking the ban.

Citing several studies on menthol’s adverse effects, acting FDA commissioner Janet Woodcock said outlawing the flavour could “help save lives” and “address health disparities experienced by communities of colour, low-income populations, and LGBTQ+ individuals, all of whom are far more likely to use these tobacco products”.

In its ruling, the federal body also announced it would seek to ban all flavoured cigars. It did not address menthol-flavoured e-cigarettes.

When will the ban go into effect?

Banning menthol cigarettes does not require congressional approval, but it will not happen immediately and could take years.

With its ruling, the FDA now enters a lengthy rule-making process that will include a public comment period.

Any final regulations will likely face a barrage of legal challenges from tobacco companies.

Anti-smoking groups say a ban is long overdue, but the fight against flavoured tobacco products has moved in fits and starts.

When it gave the FDA regulatory authority over tobacco products in 2009, Congress banned all cigarette flavours except menthol.

The agency presented a report in 2013 to show – for the first time – that menthol-flavoured cigarettes may pose significant public health risks, as they mask the harshness and throat irritation from nicotine.

It argued people may be more easily addicted to such cigarettes and find them harder to quit than non-flavoured ones.

Neither the Obama nor the Trump administration took action on the product amid vocal opposition from the tobacco lobby.

Who supports the ban?

Tobacco use has sharply declined in the US over the years, but the share of smokers who use menthol cigarettes has risen, particularly in black neighbourhoods and among young people.

Data from the US Centers for Disease Control and Prevention shows that African Americans typically smoke fewer cigarettes and start at an older age than white smokers, but die from tobacco-related illnesses, like cancer and heart disease, at much higher rates.

Proponent of a menthol ban decried the practice in a recent letter to the Biden administration, writing: “The predatory marketing of menthol cigarettes and other flavoured tobacco products must be stopped and we should all recognise this as a social justice issue.”

The letter cites a report that shows about 85% of menthol smokes today are purchased by African Americans, compared to fewer than 10% in the 1950s.

Who is against the ban?

Opponent of the ban, including black leaders like Al Sharpton, have said banning a product that is most popular among African Americans is discriminatory.

They warn that criminalising these products may lead to an underground network of buyers and sellers, and give rise to many more upsetting interactions between law enforcement and young black men.

As proof, they point to the fatal arrest of Eric Garner in 2014, an unarmed black man, by New York City police on suspicion of illegally selling “loosies”, or single cigarettes from a pack.

That case study helped defeat a menthol ban in New York City in 2019.

But the Biden administration has said closing the racial health disparities exposed by the pandemic is a top policy priority.

Black lawmakers and health groups largely support the ban as part of that broader goal.