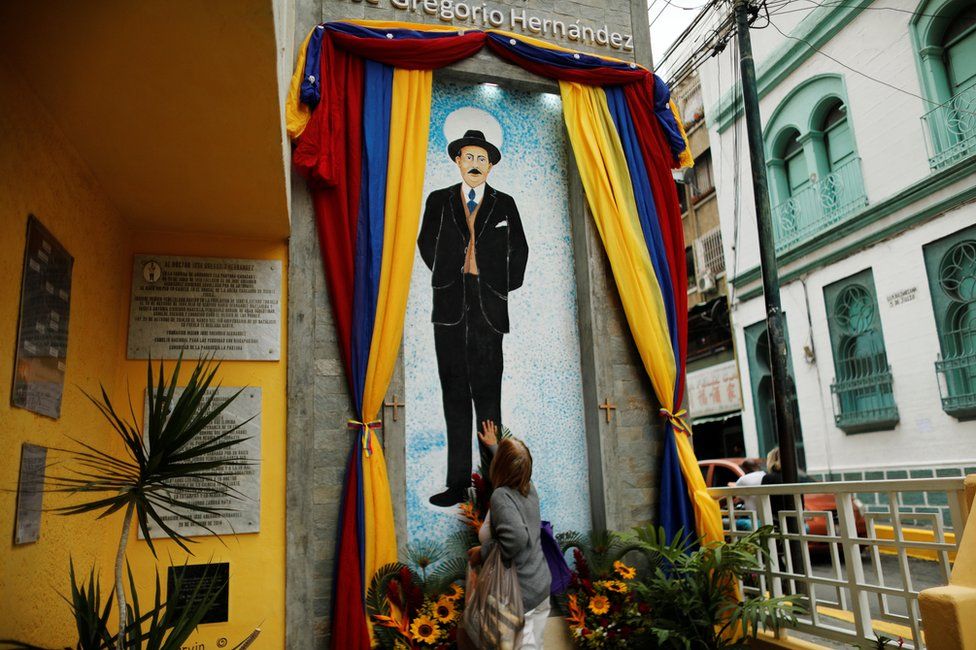 A Venezuelan doctor known for treating the poor during the Spanish flu pandemic a century ago has been beatified, a step toward sainthood in the Roman Catholic Church.

José Gregorio Hernández, who was born in 1864, is revered in the country as the “doctor of the poor”.

The beatification comes after the Church attributed a miracle to him for saving the life of a young girl.

Yaxury Solórzano survived after being shot in the head during an attempted robbery in 2017. Doctors said that, if she survived, she would be permanently disabled.

But the girl, who was 10 at the time, made a full recovery and was able to walk just weeks after leaving hospital. Her mother, according to Church records, prayed to Hernández to save her.

Born in the town of Isnotú in the state of Trujillo, Hernández studied in Paris, Berlin, Madrid, and New York, and became a renowned bacteriologist. He was hit by a car while crossing a street after picking up medicines at a pharmacy to take to a poor woman.

“He always looked after his patients with the greatest possible care… And those who didn’t have medicine he would help out in buying it,” Monsignor Tulio Ramírez told Reuters news agency. “Throughout Jose Gregorio’s life it was said that there were miracles because he was a blessed man.”

Since 1949 Venezuelan Catholics have worked towards his beatification. Pope Francis signed the decree last July, after the recognition of the miracle. According to Roman Catholic protocol, a second miracle must take place after the beatification in order to proceed to sainthood.

But for many in Venezuela, he is already a saint.

“I have been a devotee of José Gregorio since I was a child, with a family. Over time we have seen many miracles that José Gregorio has done,” said Eladio Morillo, whose family decided to produce a coffee named after Hernández to honour the “miraculous saint”.

The beatification provided a rare opportunity for unity in a country that has suffered from years of a severe economic and political crisis, and now struggles to contain the spread of Covid-19.

The ceremony had to be adjusted because of the virus. The event was held behind closed doors at a chapel north of the capital Caracas, and the Vatican’s secretary of state did not travel to the country as originally planned, citing the pandemic.

In a video message ahead of the beatification, Pope Francis said: “[Hernández] is a model of holiness committed to the defence of life, to the challenges of history and, in particular, as a paradigm of service to others, like a Good Samaritan, excluding no one.”

The Pope also said: “I sincerely believe that this moment of national unity, around the figure of the people’s doctor, constitutes a special moment for Venezuela and demands of you that you go further, that you take concrete steps in favour of unity, without letting yourselves be overcome by discouragement.”