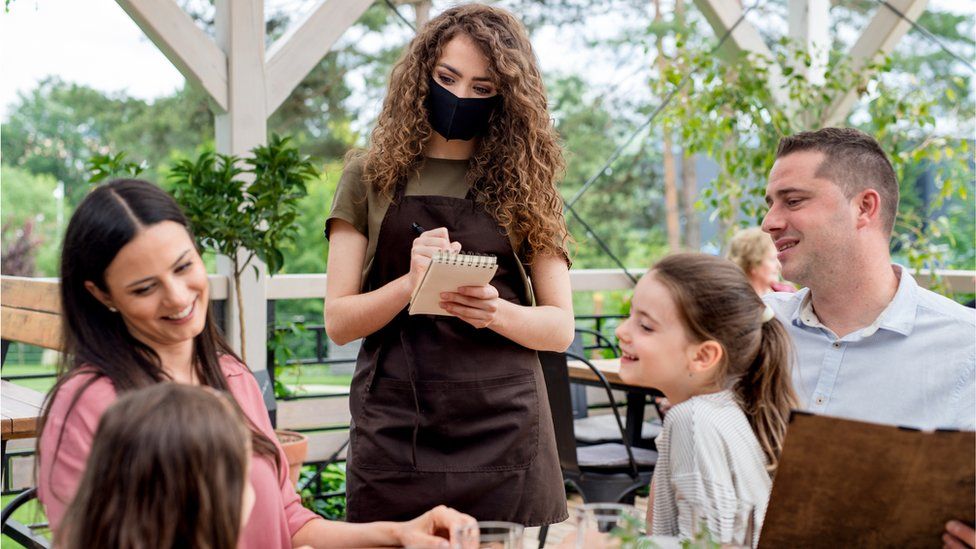 Bars and restaurants are struggling to recruit enough staff and some may not be able to fully reopen in May, after thousands of workers left the sector.

Venue owners say they are expecting huge demand from customers, but staff shortages may mean they have to limit opening hours.

Figures suggest more than one in ten UK hospitality workers left the industry in the last year.

Recruitment site Caterer.com said the pandemic and Brexit were to blame.

Some have managed to find alternative employment, but a high proportion may have left the UK altogether, the recruiter said.

So, although many hospitality workers were laid off during the last 12 months, restaurateurs are now finding it hard to fill places.

Celebrity chef Michael Caines is one of those finding recruitment difficult.

He operates two restaurants on the Cornish coast and a hotel in Exmouth. A beach bar and restaurant in Exmouth is also due to open.

He is currently trying to hire 20 new staff members across the group.

“Without question, recruitment is a challenge,” he said.

“All of the businesses are extremely busy. For the next three, four months our hotel is completely booked up, so we’re desperately trying to recruit enough staff.”

Mr Caines said Brexit and the pandemic have led European workers to leave and not return, but he said another problem is the number of workers still on furlough.

While they are waiting to return to work they are less willing to switch employers.

“So there’s a bit of nervousness from an employee’s point of view.”

Mr Caines is hoping roles will be more easily filled when students break up from college and university and start looking for summer work.

Restaurants and bars have been allowed to serve food and drink outdoors since 12 April, while indoor dining is expected to restart from 17 May. And many UK hospitality venues are hoping pent-up demand and a more UK-focused holiday season to translate into a bumper summer.

As a result, recruitment was a “growing issue”, said UK Hospitality chief executive Kate Nicholls. It was more acute in some areas, such as London, than others, she added, and could mean some venues struggle to reopen.

The trade association said chef vacancies are among the most difficult to fill. But restaurant owners have reported staff shortages across all types of roles.

Specialist recruiter, Caterer.com, said the number of vacancies on its website had grown by more than 85% in the last few weeks, with 22,000 roles now being advertised.

But it pointed to figures from the Office for National Statistics suggesting 355,000 fewer people were employed in hospitality than a year ago. Pre-pandemic around 3.2 million were employed in the sector including bars, restaurants and hotels.

“Many restaurants, pubs and bars have experienced a sudden surge in business due to built-up customer demand and an increase in consumer confidence which is great news for the hospitality industry,” said Caterer.com director Neil Pattison.

“However, the impact of the pandemic, combined with Brexit has the potential to create a significant recruitment challenge for the sector and we are likely to see the skills shortage it once faced starting to return.”

Before Brexit a lot of the UK’s hospitality workforce was made up of workers from overseas, including from the EU, but hundreds of thousands of foreign workers have left the UK over the last year and it is unclear whether they will return.

Luke Garnsworthy, who owns Crockers Henley, a hotel and fine dining restaurant in Oxfordshire, and Crockers Tring in Hertfordshire, said he is struggling to recruit enough staff for when his restaurants open fully next month.

As well as chefs, he is hoping to hire front-of-house staff and waiters.

“I’ve put adverts out and I thought I was putting the net out into a sea full of fish but it’s not been like that at all.”

Mr Garnsworthy would like to employ between 45 and 50 staff at his Henley venue where the headcount is currently only at 12.

He said senior team members will step in to fill roles where necessary, but the restaurant was only likely to be able to open five days a week instead of seven.

Recruitment in hospitality has always been a challenge, even before the pandemic, but is “definitely worse now”, according to Mr Garnsworthy.

“We are perceived as unskilled, so the country looks down their nose… and young people are not interested.”

He wants them to know that although it is hard work “the days of Gordon Ramsey shouting” are over at least.

He said staff turnover in hospitality is normally high, but he too said furloughed staff are sticking with their existing employer.

“There’s not that ebb and flow with talent because people are staying put.

“It’s very difficult at the moment and finding anyone for senior positions is hard.”

Mr Britt is hoping to recruit pastry chefs, chocolatiers and a sommelier.

“We can’t seem to find anyone in that arena,” he added.

The business took on a number of staff in October but application rates this time around are far lower.

“Some businesses closed or went bust and people felt let down by their employer or the industry as a whole,” he said.

“I know a lot of people who have moved on to something different.”