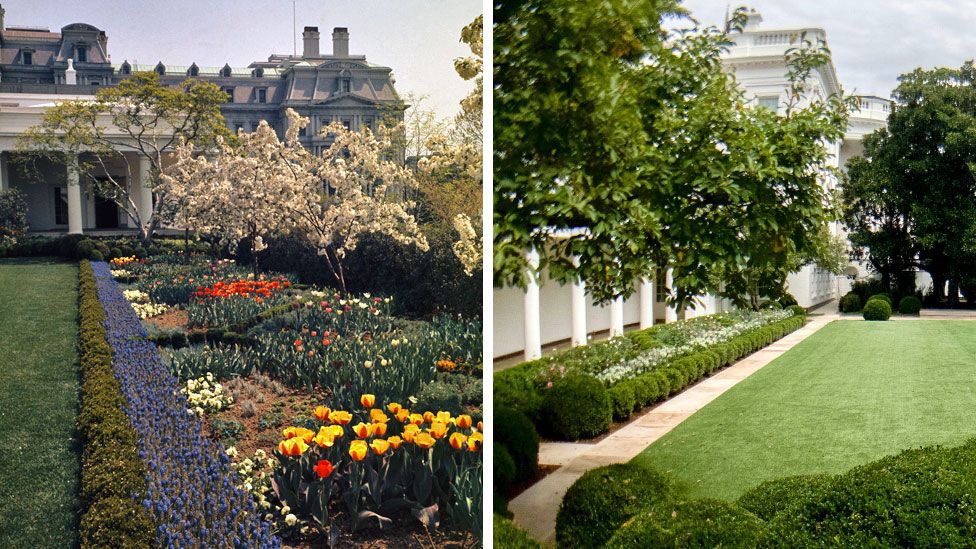 More than 50,000 people have signed an online petition calling for US First Lady Jill Biden to restore the Rose Garden at the White House to its “former glory”.

Ex-First Lady Melania Trump had some trees and some of the more colourful flowers removed last year.

According to the petition, the changes amounted to “a boring tribute to herself”.

Presidents often use the garden for addresses and press conferences.

Although the petition says Mrs Trump had “the cherry trees, a gift from Japan” removed, US media have pointed out that they were in fact crab apple trees and were replanted elsewhere in the grounds.

Notably absent from updated Rose Garden are the ten crabapple trees – five per side – that were part of the original 1962 design. The trees, I am told, were removed to the off-campus White House gardening center for care. They will eventually be replanted on the WH grounds. pic.twitter.com/jYqlDCCoVH

The petition organisers go on to urge Ms Biden and Second Gentleman Doug Emhoff – who is married to Vice-President Kamala Harris – to “take this on” and restore the garden to the previous design of former First Lady Jackie Kennedy.

Mrs Kennedy oversaw a major renovation of the garden in the 1960s.

“Jackie’s legacy was ripped away from Americans who remembered all that the Kennedys meant to us.”

Mrs Trump was criticised at the time of the changes for going ahead with the renovation when the country was in the thick of the Covid crisis and some 150,000 had already died.

-New limestone pathways form an outer border around the grass and an inner border for the boxwood and flowers.

-10 crabapple trees were taken to the offsite to be cared for and will be replanted around WH grounds. pic.twitter.com/ibnYHfvQMY