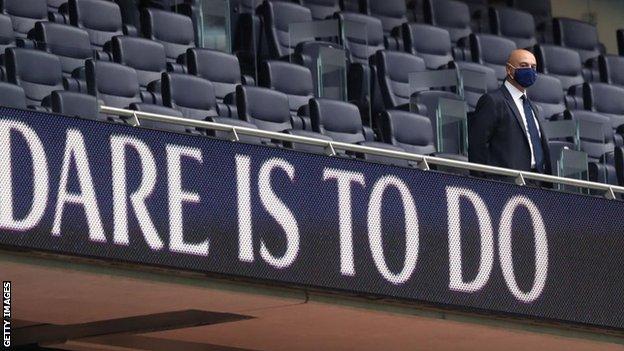 With Bayern Munich snapping up the most eligible manager on the market in Julian Nagelsmann, Tottenham have been left with an extensive list of potential candidates to consider as a replacement for Jose Mourinho.

Ryan Mason has taken temporary charge until the end of the season, but who will chairman Daniel Levy trust to take the job going forward?

A progressive, young ‘project’ coach, like Nagelsmann is and former Spurs boss Mauricio Pochettino was in 2014, or an experienced, high-profile name in the vein of Mourinho?

Tottenham face the prospect of a second successive season without Champions League football and whoever takes the reins in north London will need to ensure a club that was part of the failed breakaway Super League does not spend a third outside Europe’s elite competition.

Levy has been at the helm since 2001 and finally got the man he sought for most of those two decades when Mourinho was appointed Spurs boss in November 2019.

Now that project has come to an end, the Tottenham chairman must go back to the drawing board.

Levy’s previous appointments have ranged from club legend Glenn Hoddle to the likes of Jacques Santini, Martin Jol, Harry Redknapp and Andre Villas-Boas, while the only trophy Spurs have won during his tenure was the League Cup under Juande Ramos in 2008.

Despite the lack of silverware, Pochettino’s five-year term was the longest of any manager under Levy as he established Spurs as Champions League regulars and Premier League title challengers.

The Argentine was 42 when he arrived from Southampton, and Levy may look to candidates of a similar age and profile who have already worked in the English top flight.

At 40, Scott Parker has already overseen Fulham’s return to the Premier League via the play-offs last season, but his side are in danger of going straight back down.

The former England midfielder was a popular figure at the club as a player as well as when he returned as an under-18s coach and has qualities that may appeal to Levy and Spurs fans – a desire to play attractive football and to trust in young players.

In a similar mould is Brighton boss Graham Potter, 45, who got his break in the Swedish fourth tier, leading Ostersund through the divisions and into the Europa League before arriving at Brighton via Swansea.

Brendan Rodgers is arguably the best-suited candidate from within the Premier League but is unlikely to want to leave Leicester, so does that mean Levy will have to look abroad?

German football writer Constantin Eckner told BBC Sport Nagelsmann was considered the leading contender but any move was unlikely because of “his desire for championships”.

Ajax manager Erik ten Hag was the favourite at the time of publishing this article, having led the Dutch giants to the Champions League semi-finals in 2019, but he signed a contract extension with the Amsterdam club on Friday that runs until 2023.

Former RB Leipzig coach and director of football Ralf Rangnick is another name being mooted and is currently out of work.

Rangnick, 62, who also enjoyed success at Schalke and Hoffenheim, turned down the Chelsea job this season and his methods have influenced a host of coaches including Nagelsmann, Thomas Tuchel and Jurgen Klopp.

The other option for Levy is to go for an international coach – as he did with the unsuccessful appointment of former France manager Santini – so could Spurs pair England captain Harry Kane with Three Lions boss Gareth Southgate?

Analysis – Levy needs to get this one right

Tottenham’s next manager will be the 10th permanent appointment made during Daniel Levy’s 20 years as chairman. After the events of the past week, he really needs to get this one right.

In a way, the timing of Jose Mourinho’s dismissal made no sense. Ditching the man whose major currency is silverware less than a week before a major final and replacing him with a rookie yet to reach his 30th birthday is at odds with the clarity Levy has brought to his role.

Uncertainty surrounds the future of Harry Kane, although whether anyone has the funds to buy him is another matter given the England skipper’s contract runs to 2024.

The feelgood factor that existed around the club as it approached its first Champions League final has been lost. The absence of fans – and enormous financial hole created by the pandemic – gives Tottenham the impression of a club searching for its direction again.

Ajax’s Erik ten Hag would, stylistically, have seemed a good fit. The same is true of the Maurizio Sarri who did so well at Napoli, though the Sarri from Chelsea and Juventus less so.

Wolves boss Nuno Espirito Santo gives the impression of someone reaching the end of the line in his current job but, at their most effective, his team at Molineux is based on counter-attacks.

Parker knows Tottenham, but the leap from Fulham is a big one and after that we are into the likes of Rafael Benitez, Massimiliano Allegri and Marcelo Bielsa, who would all be imaginative choices without being long term.

If you are viewing this page on the BBC News app please click here to vote.

What makes the Tottenham job attractive?

Spurs can boast an impressive new stadium, for which the club are still to sell the naming rights, and a state-of-the-art training ground to rival any club in Europe.

The 62,850-seat Tottenham Hotspur Stadium, which can also host NFL matches and concerts, cost an estimated £1bn to build and is a venue worthy of hosting Champions League football.

Despite Mourinho suggesting towards the end of his tenure that the Tottenham squad was not good enough, the club have invested a relatively significant amount during the past couple of seasons after going more than a year without making a transfer.

Tanguy Ndombele, the club-record signing, arrived from Lyon the previous summer for £54m as part of a £130m outlay for the 2019-20 campaign that also saw Ryan Sessegnon join from Fulham and Steven Bergwijn sign from PSV Eindhoven in the January.

There is also a feeling the club have talented young players coming through the academy, where Mason is head of player development, and Mourinho handed senior debuts to the likes of Dane Scarlett, Alfie Devine, Nile John, Marcel Lavinier and Harvey White during his time in charge.

What about Kane and Son?

Of course, whether Kane, and also Son Heung-min, stay at the club beyond this summer will have a huge impact on what the future manager has at their disposal.

Kane has been in remarkable form this season, leading both the goals and assists charts in the Premier League, and it was his prolific partnership with Son that led Spurs to a brief stint at the top of the table before Christmas.

However, reports have emerged that Kane is considering his future at the club and will make a decision after the European Championship this summer.

Kane is yet to win a trophy with the club and potentially faces a second successive season without Champions League football, but still has three years remaining on his contract and Levy, a notoriously tough negotiator, is unlikely to let his star striker leave for a reduced price.

The forward also turns 28 in July and, with the likes of Borussia Dortmund’s Erling Braut Haaland, 20, and Paris St-Germain’s Kylian Mbappe, 22, also on their shortlists, will the few clubs capable of affording Kane want to pay big money for him or go for a younger option?

Son is a year older than Kane but is said to be considering a new contract at the club, with his current deal set to expire in 2023.