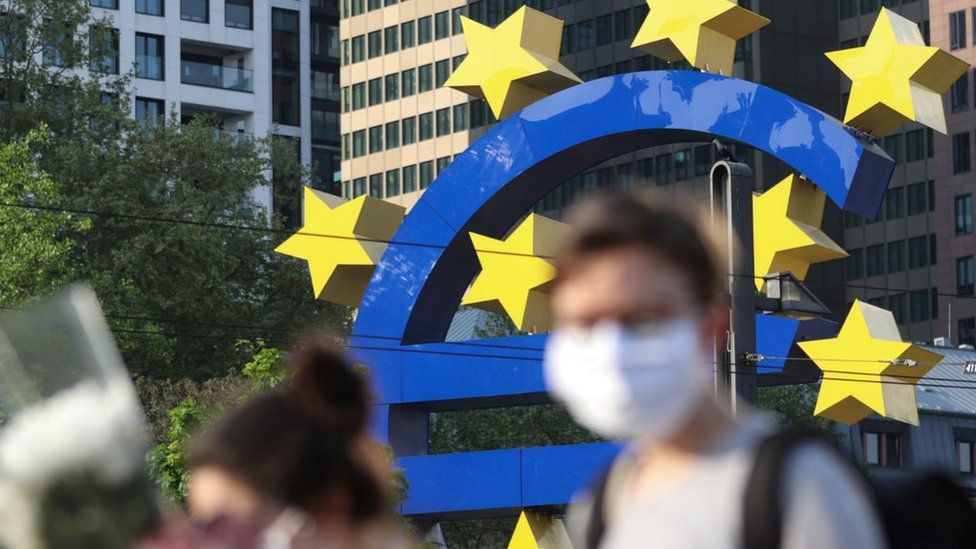 The eurozone’s economy has fallen back into recession as the impact of the pandemic continues to hit activity.

Europe’s economies have been set back by a renewed surge in infections this year and Covid-related restrictions.

The eurozone shrank by 0.6% in the January-to-March period – the second consecutive contraction, which is a widely-used definition of a recession.

It is the second such episode, a so-called double-dip recession, since the onset of the pandemic.

However, among the national economies that have reported data so far, that pattern was repeated only by Italy.

Other countries reported some growth in one or other of the last two quarters.

The French economy did grow in the first three months of this year, by 0.4%, after a decline at the end of 2020, although the rebound was described by the national statistical agency as “limited”.

In Germany it was the other way around, with some growth in the fourth quarter of last year and a sharp decline – of 1.7% – revealed by the latest figures.

There were some specific factors that may have affected Germany.

Claus Vistesen of Pantheon Macroeconomics says the economy was stung by a value added tax (VAT) hike which led to a fall in spending and construction.

A temporary VAT cut in Germany – intended to support the economy during the pandemic – came to an end at the turn of the year.

The bigger picture is a region where economic activity has been set back once again by the spread of the virus and restrictions imposed to curb it.

The figures are particularly bleak in the case of Italy, where the economy is still 6.6% smaller than at the end of 2019, before the pandemic.

That said, the economic damage in this phase of the health crisis is less severe. Economic activity in the eurozone in the most recent period was 11% higher than at the nadir in the second quarter of last year.

That supports the idea that businesses have found ways to reduce the impact that restrictions have on what they do, although for some the effect is still severe.

Looking ahead, this weak performance is expected to improve as vaccination programmes allow further easing of restrictions and support consumer confidence. That will be especially important in southern Europe where many businesses need to see a recovery in tourism.