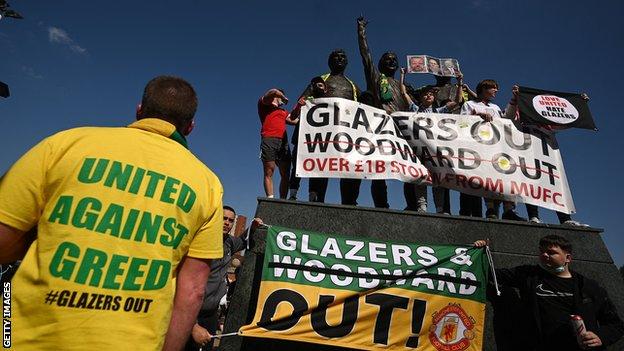 Manchester United supporters have told the club that they were “disgusted, embarrassed and angry” about its plans to play in the European Super League.

At an emergency fans forum, the Manchester United Supporters Trust (MUST) read a statement out to club executive vice-chairman Ed Woodward.

“We have zero trust in the owners,” MUST said.

“The complete lack of engagement with fans, our players and manager is a gross mishandling of club affairs and one which we cannot forgive.

“It was an attack on fans and on clubs across the whole of football and we have simply had enough.”

Following United’s withdrawal from the ESL after a furious backlash, Manchester United co-chairman Joel Glazer said the club “apologise unreservedly for the unrest” caused and said they “got it wrong”.

MUST said the apology “is not accepted” and demanded the Glazer family cover any costs incurred by the club’s involvement in the ESL.

“Actions speak louder than words and he and his family have shown time and again that their sole motivation is personal profit at the expense of our football club,” the statement from the fans group continued.

Woodward, who will step down from his role at United at the end of 2021, reiterated the apology when he met with supporters.

After the meeting, a United spokesperson said club officials “listened carefully to the strong views” and that they “remain committed to engagement with the Fans’ Forum to ensure that fan interests are understood and respected in future”.

Manchester United manager Ole Gunnar Solskjaer, who last week spoke to fans who entered the club’s training ground at Carrington to protest against the Glazer family’s ownership, said “it’s important that the fans’ views are listened to and we communicate better”.

“I’ve been backed, I’ve had great support from the club and the owners and I’m sure I will get the backing again to go one step further,” he continued.

“I’m so happy all the clubs have agreed that this [ESL] shouldn’t be the way of moving forward. Then again, when the protests are on, it’s important they go in a good fashion and that we keep it peaceful.”

United supporters have also outlined a number of demands, including that the club “openly engage and promote” the fan-led review into English football and use it as an opportunity to rebalance club ownership.

Fans also want independent directors appointed to “protect the interest of the club” rather than “its shareholders”.