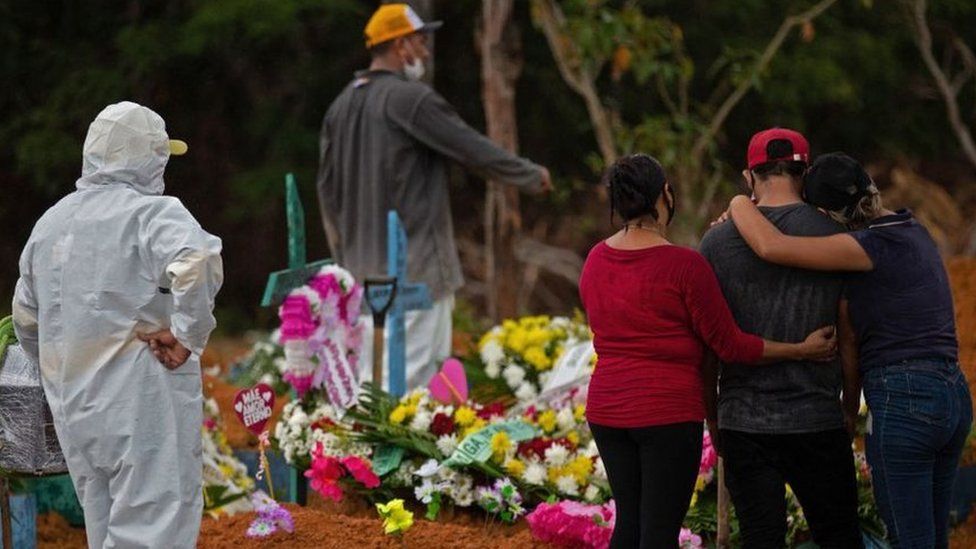 The number of deaths related to Covid-19 has passed 400,000 in Brazil, the second-highest in the world, as the country continues to struggle with its vaccination programme.

The 14-day average of deaths and cases remains high but has seen a slight fall.

Congress has opened an inquiry into the government’s handling of the pandemic.

President Jair Bolsonaro, who has frequently spoken out against lockdowns, masks and defended unproved drugs as treatment, is facing widespread criticism and his support has plummeted.

The outbreak has been fuelled by more transmissible variants of the virus and a lack of co-ordinated national measures. The situation has improved in many areas, including where the health system was on the brink of collapse, after states and cities imposed restrictions, but they are already being eased.

The rate of occupancy of intensive care unit beds remains at or above 90% in more than a third of the states, according to the health institute Fiocruz, which said the scenario remained “critical”.

“[There’s] a tendency of a slight fall but not yet of containment of the epidemic,” the institute said in a report (in Portuguese), warning that the daily number of deaths is likely to remain high.

Brazil recorded 100,000 deaths in just 37 days, between March and April, which were the worst months in the country. Only the US has a higher death toll.

Since the start of the pandemic, Brazil has had more than 14.5 million cases.

Meanwhile, some cities have had to temporarily halt their vaccination programmes amid a shortage of doses. About 13% of the population of 212 million has received at least one dose, according to the Our World in Data tracker.

On Tuesday, a Senate commission started an official inquiry into the Bolsonaro government’s response to Covid-19. They have the power to demand documents and call on witnesses to testify, and the findings can be submitted to authorities with the ability to prosecute.

The commission will investigate a number of actions, including slow vaccine procurement by the president, his repeated statements downplaying the severity of the virus, and the promotion of scientifically unproven drugs such as hydroxychloroquine.

It will also analyse whether the government was negligent in the oxygen crisis in Amazonas state, which was ravaged by a more infectious variant earlier this year, and if indigenous communities in the Amazon were left without assistance, in what critics have described as possible genocide.

The inquiry could add to calls for impeachment of the president, though analysts say that is unlikely to happen. But the proceedings and possible revelations can cause serious damage to President Bolsonaro, who is almost certain to run for re-election next year, when his main rival could be former leftist President Luiz Inácio Lula da Silva.

President Bolsonaro said he was “not worried” by the inquiry. Since the start of the pandemic, he has opposed any lockdown measures arguing that the damage to the economy would be worse than the effects of the virus itself, a position shared by many of his supporters.