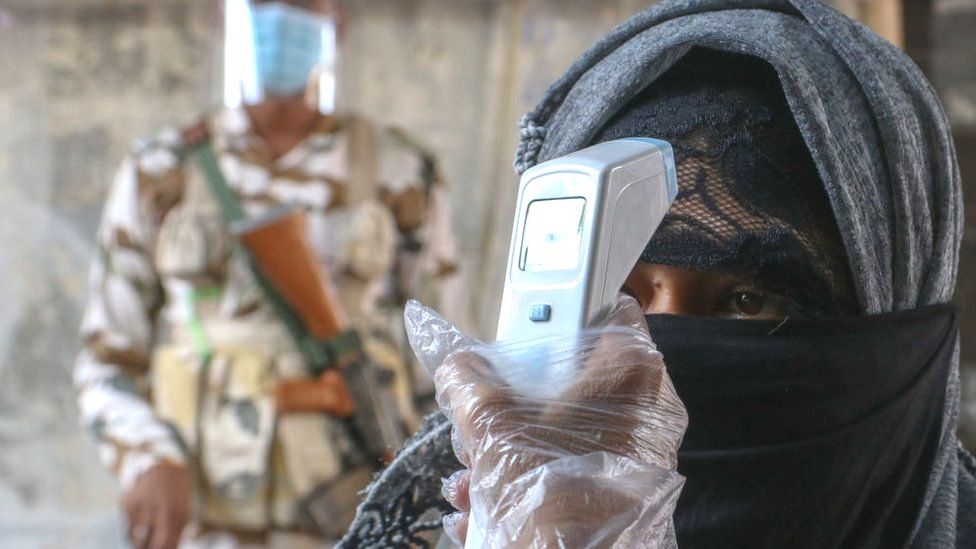 People in the Indian state of West Bengal are voting in the final phase of elections despite a rising caseload.

Long queues were seen outside polling booths, raising concerns about the further spread of Covid amidst a deadly second wave sweeping the country.

Experts already fear that West Bengal could be the next epicentre of the virus, given the fact that campaigning has continued there with large crowds.

The state has already seen seven phases of voting. The eastern state is one of the few where Prime Minister Narendra Modi does not have a majority of seats.

There has been a lot of criticism that he continued to hold large rallies there even as the virus began overwhelming the country.

Our correspondent, Amitabha Bhattasali says some of the biggest rallies, including those attended by Prime Minister Narendra Modi, saw throngs of people not wearing masks or maintaining social distancing.

What is happening now in India?

Hospitals have been overwhelmed, oxygen is in critically low supply and crematoriums are operating non-stop.

The overall death toll officially surpassed 200,000 though experts believe the actual number could be much higher.

It was the deadliest day so far, with 3,645 people succumbing to the coronavirus.

The government had said that all adults will be eligible for Covid-19 vaccinations from May 1.

Indians have been reporting problems with online registration for a mass vaccination drive scheduled to begin at the weekend.

People on social media complained of the website crashing and not getting a slot.

So far, India has been vaccinating health workers, front line workers and adults over the age of 45.

But less than 10% of the population has received an initial jab and there are concerns about meeting demand.

Although India is one of the world’s biggest producers of vaccines, it does not yet have the stocks for the roughly 600 million people becoming eligible.

The White House says the United States is redirecting its own order of AstraZeneca manufacturing supplies to India, allowing it to to make more than 20 million doses of the vaccine.

Epidemiologist Bhramar Mukherjee says India must combine the immunisation drive with a widespread lockdown to slow the spread.

We need much larger scale lockdowns in India. Things are getting worse everyday. What are we waiting for?

It is a national medical emergency.

At this point lives are so much more important than livelihoods.

Provide assistance to the poor, but please lockdown and vaccinate.

Several parts of the country are under lockdown and curfew, including the capital Delhi.

The government of Maharashtra, which is home to the financial capital Mumbai, is considering extending its lockdown until mid-May.

There is no lockdown or curfew in West Bengal state though.