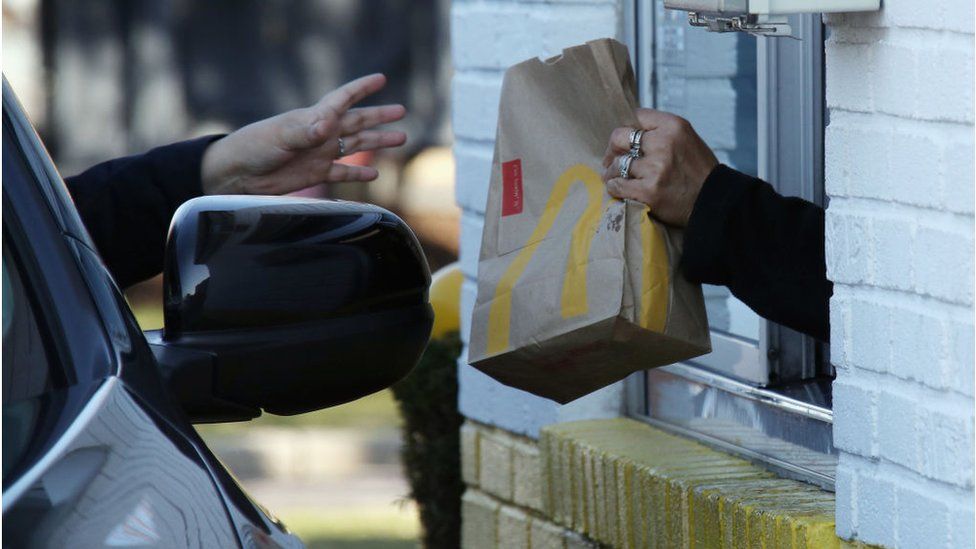 McDonald’s sales have soared this year, even though Covid restrictions remain in place in many countries.

Profits in the last three months jumped almost 40% to $1.54bn (£1.1bn), driven largely by the return of US customers.

There was also strong growth in the UK, Australia and Canada, partly offset by declines in Germany and France.

The fast food giant is recovering from 2020 which it described in January as one of its “most challenging” years.

Last year the coronavirus pandemic and lockdown restrictions in many countries ate into its sales.

But first quarter global sales returned to pre-pandemic levels, as many countries, including the US, began easing restrictions on eating out and President Biden’s stimulus spending put extra money into Americans’ pockets.

McDonald’s added to its menu to attract customers back. In February the fast food giant launched Crispy Chicken Sandwiches to take on US rivals including Chick-fil-A and Popeyes.

But the burger chain said it would also “double down” on marketing its staple items, such as Big Macs and Chicken McNuggets, and continue expanding drive-throughs, delivery and online offerings.

However, for the first quarter ending 31 March this year, sales outstripped the same period in 2019 “even as resurgences [of the virus] and operating restrictions persist in many parts of the world” the company said.

Laura Hoy, equity analyst at Hargreaves Lansdown, said: “McDonald’s looks to be past the worst of the pandemic and its push to expand delivery and digital offerings should stand it in good stead well into the future”.

“We don’t see our obsession with having everything a click away changing anytime soon and McDonald’s is poised to continue building on that trend.”

McDonald’s has been operating under varying restrictions in the UK since the first lockdown in March 2020. Like many fast food chains it initially closed its doors, but then gradually reopened for takeaway in the following months, with additional safety measures such as till screens and hand sanitiser dispensers.

McDonald’s UK drive-throughs reopened in May and June 2020 leading to traffic jams at some sites.

In October food delivery company Just Eat Takeaway said orders had grown by more than 40% after it added 800 McDonald’s restaurants and 300 Greggs outlets to its network.

However in January this year McDonald’s put walk-in takeaways on hold again as new UK lockdown restrictions came into force.