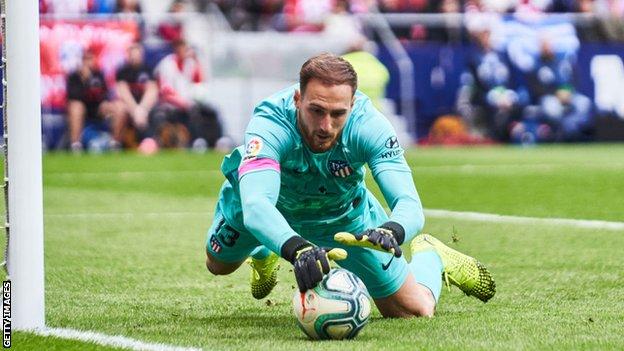 Seven years on, Oblak can lay claim to being the best in his position in the world. His stats are remarkable and Simeone has had the last laugh.

Oblak’s record since he joined Atletico shows 157 clean sheets in 298 club matches in all competitions, or put another way, he has not conceded a goal in 53% of the games in which he has played.

He has won four Zamoras (the award given to the goalkeeper who concedes fewest goals during the season) between 2016 and 2019 and has kept a clean sheet in 18 of his 41 matches during this campaign.

Anyone wanting to sign the 28-year-old now would have to meet the club’s 120m euros release clause.

I caught up with him recently to discuss the art of goalkeeping, his influences and whether a Premier League move might be on the cards. You can listen to the interview as part of BBC Radio 5 Live’s Football Daily podcast, which will be available here later on Thursday.

Oblak comes from sporting stock. His father was an amateur goalkeeper and his older sister, Teja, plays basketball for Slovenia. He began by playing in goal as a five-year-old with local club Locan before joining the academy of Olimpija Ljubljana at the age of 10. He earned his place in the first-team squad when the club’s then goalkeeper and goalkeeping coach Robert Volk spotted his talent and gave up his own spot in the team. He told the club “this kid is better than me”. It was not long before he was proved right. Oblak made his professional debut aged just 16 in 2009.

“I think I was born to be a goalkeeper. I don’t know how to explain it but I’m sure it is something inside me.

“My father was my first idol. I watched him so many times behind the goal. And when he dived to one side, I dived to that side and when the other side I dived to the other side. He was not the sort of father who said “you need to be a goalkeeper, you need to train”. But I so admired him and I wanted to be like him.

“[At Ljubljana] we moved up into the first division and I started playing regularly. I was 16 and many players in the team were twice my age. It was like I was playing with my parents. But I didn’t feel 16. I felt like one of them.

“I had to grow fast, become an adult on the pitch. Maybe at home you are still the kid. I certainly acted differently with friends, I was a teenager with them. But when you wear the kit, you have to think differently, you have to be cool, prepared. Not easy to do, but I never forgot I was fulfilling a dream.”

The art of goalkeeping

While his status has long since been cemented in Spain, to a UK audience he may be best known for a match-winning performance against Liverpool at Anfield in the Champions League last season. So what does it take to star in those big moments? What does your mindset need to be? And what’s it like when, in the biggest game of your season, you have Mohamed Salah bearing down on you…

“First you check all around, watch the ball, you watch his position, his body, although great players can hold one position with their body and then do something totally different with the ball, so the most important thing is to keep your focus on the ball.

“You then wait until he shoots, tries to dribble past you or tries to pass to another player. The most important thing for a goalkeeper is the position he is in because if you are in a good position, have the right body posture and a cool head then many times you don’t have to have extraordinary reactions to stop the ball.

“Sometimes when people see someone make an amazing save, they don’t realise they had to make it because they were not in the right position. They needed to correct a mistake.

“Often you make a catch that looks easy but you are proud of it because you were in the right place at the right time.

“The players don’t speak to me [throughout a game] but I speak to them to maintain concentration. ‘Go right, go left, go in front, be careful.’ When you are speaking it’s impossible not to concentrate. It doesn’t matter if you do nothing for the whole of the game, if you are speaking you miss nothing.

“Mistakes will always happen but players at the top level do not have problems with errors. After every one of them you can improve and not make it again.

“It’s normal during your career that there should be ups and downs but if you can manage this in your head then the important thing is to always be trying to improve and be better. It is not just a saying, it has to be your mantra and your way of living.

“In professional football they speak a lot about pressure, but I don’t see it like that. What I see is something inside of you pushing you more and more to be better.”

In the days before extensive use of the internet, television provided Oblak with his greatest external goalkeeping influences and he has always most admired those players who have adjusted to the changing nature of the game. Personally, he says Miha Mlakar, who remains his best friend, agent and mentor, has been crucial in helping him develop what he refers to as an “elite mentality”.

“When they started, football was a little bit different, so during their careers they had to add things to the game that enabled them to do new things: our role has changed dramatically, more than any other in the past 20 or 30 years. We now have to start attacks, so we need to see the bigger picture and understand what the manager wants.

“In the past, keepers took a step or two back first, now the style is different, but you don’t always need to step forward. Sometimes you need to step back. Or you need to be closer to the line. It depends where defenders and attackers are.

“You have to read 100 things in a second when the ball is close to goal, but also when it is away. You have to imagine what can happen.

In 2018 Chelsea were rumoured to be interested in bringing Oblak to Stamford Bridge. When it became clear that Atletico would not accept a penny less than 100m euros, the Blues opted to sign Kepa Arrizabalaga from Athletic Bilbao instead.

“The Premier League has strong teams. Maybe the strongest.

“I don’t know what the future will bring, but I am sure that in any league I would play in I could play well.

“I have now been in Spain for seven years. Let’s see. I’m still young and I still have some years in front of me. The most important thing for me is the hope that I do not have a lot of injuries, and then we’ll see.