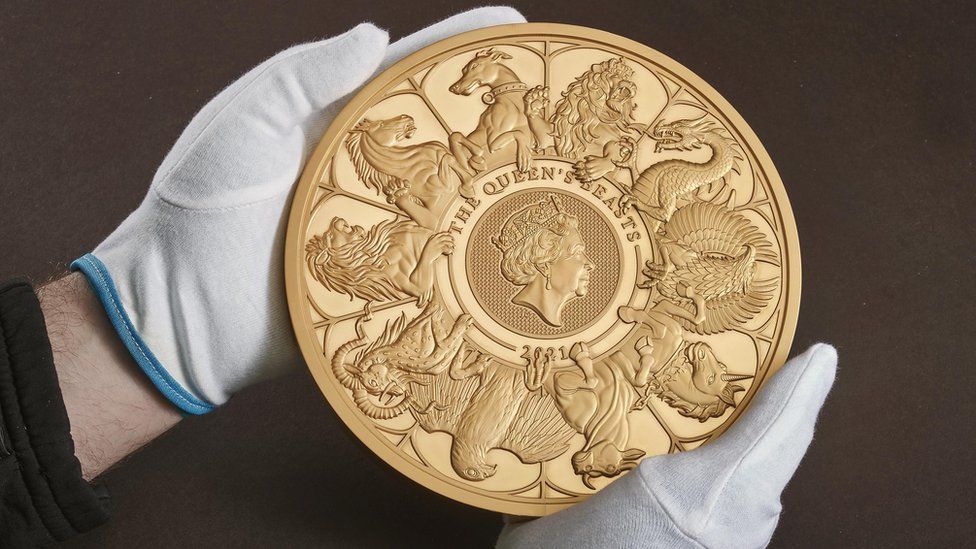 The Royal Mint said its biggest coin took 400 hours to produce – including four days of polishing.

It marks the end of the mint’s Queen’s Beasts commemorative coin collection, inspired by 10 stone statues which lined the Queen’s route to Westminster Abbey at her coronation in 1953.

Starting with the Lion of England in 2017, the collection has showcased the history and symbolism of each creature in turn.

The coin reunites all 10 beasts in one design, including a lion, griffin, falcon, bull, yale, greyhound, dragon, unicorn and a horse.

“The Royal Mint’s Queen’s Beasts commemorative coin collection has grown in popularity since the first beast was introduced in 2017 and has become a firm favourite amongst coin collectors across the globe,” said divisional director Clare Maclennan.

“This coin sets a new standard for minting, combining centuries old techniques with innovative technology to create a unique and beautiful work of art.”

Engraving machines at the mint’s site in Llantrisant, Rhondda Cynon Taf, were used to cut the design on to the coin, which has a denomination of £10,000.

A master toolmaker then hand-worked the coin, removing any marks made by the cutting process before it was polished.

The coin was laser-frosted to texture the surface.

The mint said the price of the £10,000 denomination gold version was available on application.