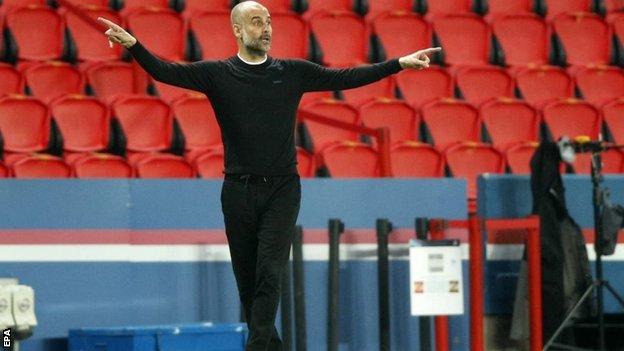 Manchester City boss Pep Guardiola says his side could face elimination if they are “shy” in the second leg of their Champions League semi-final against Paris St-Germain next Tuesday.

The visitors were unusually passive in the first period at Parc des Princes.

“It’s halfway for the job and it is simple, if we play shy and not who we are, PSG have the quality to win 2-0,” Guardiola said.

“If we play like the second half or in our last games, we have the chance to reach the final.”

City, who could win the Premier League title this weekend, are in only their second Champions League semi-final, having lost to Real Madrid in 2016.

Guardiola’s side trailed to Marquinhos’ 15th-minute header in the first leg and could have been further behind before De Bruyne and Mahrez scored in the second half.

“It is a team that is able to do whatever they want because they have the quality to do it. That’s why, when you start the game, you are a little bit cautious. At half-time I said I’m not complaining, I understand you feel the responsibility because you want to get to the final,” said Guardiola.

“It’s just to understand how to handle this and be ourselves, don’t be shy. If we lose, we lose. If we don’t get to the final we will try again next season, but try to play our game like we spoke without the ball.

“What is our identity with and without the ball? Go out there and try to do it. And they were fantastic. I admire them for how they went from being not good to how they changed to do well.”

Tuchel is now at Chelsea, who drew 1-1 at Real Madrid in the other semi-final first leg on Tuesday.

“I’m sure the second leg will be different because Mauricio will learn from watching the game,” Guardiola said. “We will also watch the game and change some things to be more fluid and aggressive in our game.

“I was happy that in the locker room afterwards the players were so calm. No cheering, just calm, because we know anything can happen in the second leg. Now we go to Crystal Palace with an incredible opportunity for the Premier League and three days later try to play a good game against PSG again and reach the final.”

Guardiola has enjoyed huge success in his five years at Manchester City with an eighth trophy on the way once they wrap up the league. But this is the furthest he has taken City in Europe.

“It is the second time in our history at this stage,” the two-time Champions League winner as Barcelona boss said.

“So many players, 80% of them, it is the first time they have played in the semi-finals of the Champions League. It is not like other teams that have played many times. It is a process.

“It is just to convince them when we play who we are, everything is easier. Hopefully next game it is going to happen.

The result was a disappointment for PSG and Pochettino, who has yet to win a trophy as a manager. They sit one point behind Lille in the French league with four games to go.

“We need to win and score two goals, so the feeling is not good,” he said. “It is not the moment to talk. It is very painful. We are all disappointed. We need to build our form.

“It is going to be difficult but we have to believe we can do it in Manchester. We have the talent to do what we want.”