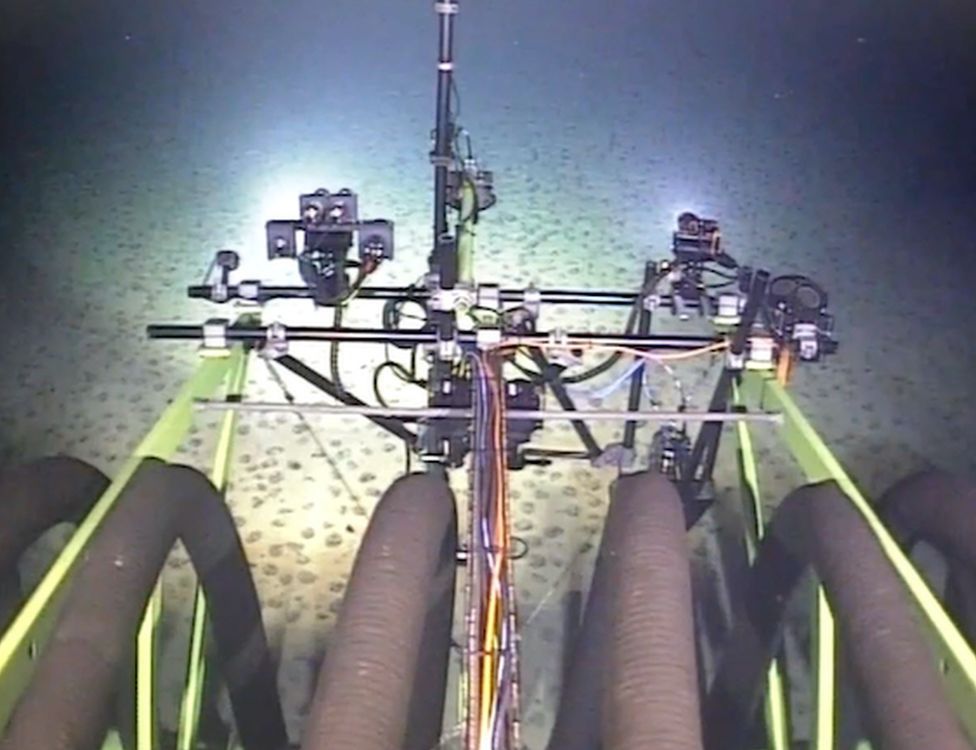 A prototype deep sea mining machine is lying stranded on the floor of the Pacific Ocean.

The 25-tonne un-crewed device became detached from the cable linking it to a ship at the surface.

The accident happened halfway through a month-long programme of trials and research.

It comes amid heightened controversy over plans to mine the minerals contained in the seabed.

The robotic machine, known as Patania II, was developed by GSR, a Belgian company, to collect small rocks known as nodules.

It was deployed in an area of the Pacific licensed to GSR for exploration – several dozen zones have been earmarked to companies and governments in this way.

The first phase of trials was almost complete when the umbilical cable became detached from its connection to the machine.

A spokesman for GSR told BBC News: “On its final dive in the GSR area, a lifting point separated and Patania II now stands on the seafloor.

“An operation to reconnect the lifting point begins this evening and we will provide an update in due course.”

If the machine is successfully retrieved, it will be redeployed for further research in an area licensed to Germany.

But recovery in such extreme depths cannot be guaranteed.

The incident happened a few days ago and the news was just broken by Greenpeace which has been monitoring the activities of deep sea mining companies.

Dr Sandra Schoettner, a deep-sea biologist from Greenpeace Germany, who’s on board the Rainbow Warrior ship in the Pacific Ocean, said: “It’s ironic that an industry that wants to extract metals from the seabed ends up dropping it down there instead.

“This glaring operational failure must act as a stark warning that deep sea mining is too big a risk. Losing control of a 25-tonne mining machine at the bottom of the Pacific Ocean should sink the idea of ever mining the deep sea.”

Two years ago, the same company had to stop trials of a smaller prototype after damage to its umbilical cable.

Clearly, there are serious technological challenges to operating in the pitch-black depths.

Another mining machine, Apollo II, designed by a Dutch company, was battered by rocks, sand and turbulence even in shallow waters off Spain two years ago.

The goal is to extract valuable metals such as cobalt and nickel, which are important for low-carbon technologies including electric cars.

Earlier this month, BMW, Volvo, Samsung and Google declared that they would join a moratorium on deep ocean metals until the risks to the environment are better understood.