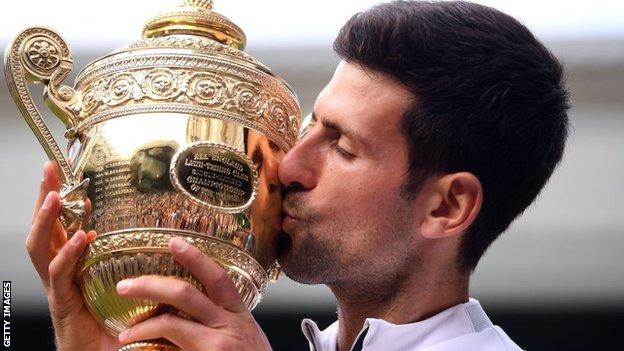 Wimbledon will abandon its traditional rest day on the middle Sunday of the tournament from 2022.

The Grand Slam will instead be played over 14 consecutive days, with All England Lawn Tennis Club chairman Ian Hewitt saying this was possible because of better grass-court maintenance.

Organisers also revealed they are hoping to have fans at a minimum of 25% capacity this year.

Ticket prices will stay at 2020 levels, with prize money yet to be decided.

“We plan to deliver the best Championships possible in accordance with public safety. It will necessarily be different from Wimbledon as we know it,” Hewitt said.

A ‘new tradition’ for Wimbledon

Wimbledon is the only one of the four Grand Slams where there is no play on the middle Sunday.

The rest day has meant that the Monday of the second week has always been very busy with all the men’s and women’s last-16 matches being held on the same day.

There has been play four times on the Sunday because of rain disruptions during the week, with the tournament opening its doors in 1991, 1997, 2004 and 2016 and enjoying a carnival-like atmosphere that is different to the other days.

All England Lawn Tennis Club chief executive Sally Bolton said Wimbledon wanted to find ways of preserving some of that atmosphere and was carrying out a public consultation to see what fans would like to see.

“Over time Wimbledon has continuously evolved to meet changing demands and behaviours of our fans – always changing, always staying the same is something we talk about often,” Bolton said.

“We want more of this wonderful event to be available to more people around the world to share in the joy of the Championships.

“Including Middle Sunday permanently in our schedule will allow us to do just that and become a new tradition which we hope we can become immensely proud of.

“It enables us to do more with the second Monday, which is known as ‘manic’ for good reason.”

The last-16 matches will be spread across the Sunday and Monday, with Bolton saying it would give players more of a platform for quality matches and offer fans a better chance to watch more of the action.

Several 2021 plans still to be finalised

Wimbledon was cancelled last year because of the coronavirus pandemic and while it will return on 28 June, there are still several aspects to be finalised.

Bolton said they were waiting for government guidance based on research it is carrying out at the moment on the return of fans to stadiums before making decisions on capacity.

Much will also ride on the government’s roadmap for easing lockdown in England, which states all legal limits on social contact will be removed no earlier than 21 June.

“We very much hope that the 25% will be a minimum position that we can build from,” she said, adding that a decision on ticket distribution would therefore be left “as late as possible”.

Uncertainty over attendances means organisers will not decide on prize money amounts until June.

Plans for Henman Hill – where fans without showcourt tickets can sit on the grass to watch the action on a big screen outside Court One – are still being formulated, but Bolton said it could be possible to open it with social distancing still in place.

Wimbledon was the only Grand Slam to be cancelled last year and the All England Club received a total of £180m from the pandemic insurance it took out.

The annual surplus paid to the LTA – British tennis’ governing body – fell as expected, but remained at a healthy £35.9m.

No private houses for players

Among the other changes to this year’s tournament is that players will be unable to rent private housing and will have to stay in a hotel.

The rule applies even to British players who live nearby, including Andy Murray.

“The minimised risk environment we created for the players is a requirement from the government to bring athletes without them going into quarantine upon entry into the UK,” Bolton said.

“Players enjoy private housing and we hope to bring it back next year but it’s just not possible this year.”

Unlike at some recent Grand Slams where there were electronic line calls, there will still be line judges at Wimbledon this year but the shot clock – which ensures players serve within 25 seconds – will be used for the first time.

All events will take place as usual, with the exception of the invitational (legends’) events.

All eyes are now on the series of test events currently taking place in the UK with fans in attendance.

There seems little prospect of capacity crowds at Wimbledon this year, but genuine hope that the capacity will rise above 25%.

Manic Monday will be missed, in the way we have missed the excitement of 10 Premier League games all kicking off at 3pm on a Saturday afternoon. But we will at least be able to savour each last-16 match a little more.

All the players will have to stay in official hotels and will be limited to an entourage of three.

But despite the pandemic, and in contrast to some recent Grand Slams, real human beings will call the lines.