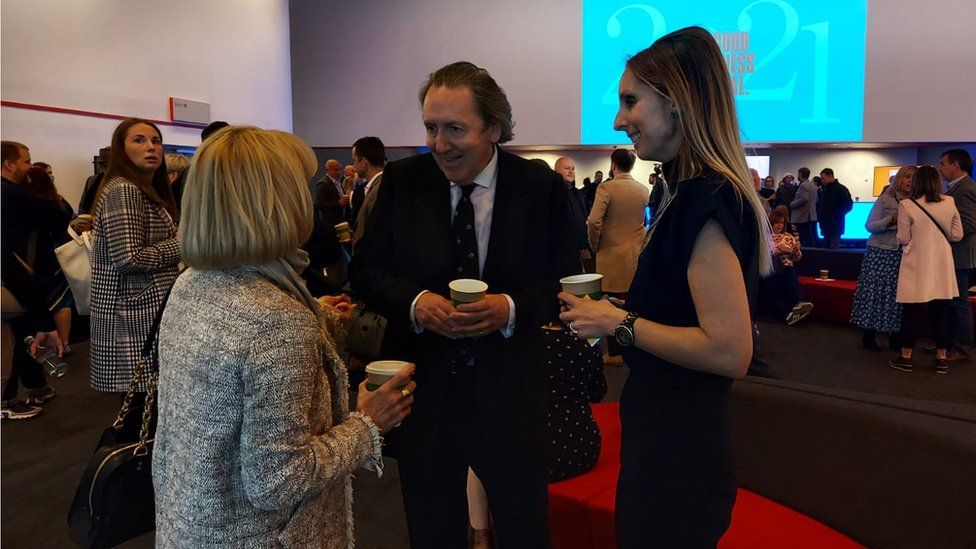 It is hoped the “pioneering” event, part of a set of trials being monitored by scientists, will help pave the way for a return to more normal activities.

Attendees were not required to socially distance or provide a vaccine certification.

Instead they were asked to provide personal details and take a lateral-flow test beforehand and afterwards.

The data will be analysed at four UK universities – Edinburgh, Loughborough, Liverpool and UCL, as part of the government’s Events and Research Programme (ERP).

“It genuinely feels like an experiment,” said Wayne Hemingway, the designer and businessman who organised the Good Business Festival.

“Are people going to take their masks off, are they going to keep them on? You’re allowed to shake hands,” he told the BBC.

“This is also a test for events that are nothing to do with business because nobody really knows what’s going to happen,” said Mr Hemmingway.

“But I am pretty confident that as human beings we enjoy getting together… it’s made us what we are.”

After the presentations and networking, a comedy show was due to take place to monitor audience laughter – another milestone moment.

Garth Dallas from the event team said: “This is just amazing. Liverpool is an event city and that’s why we were chosen to be part of this.

“Businesses have embraced this. Not all – but enough for us to hold this event.”

Other pilot events being monitored in the government’s research programme are the World Snooker Championships, held in Sheffield on 17 April, and the Brit Awards in London on 11 May.

The data gathered will be used to determine how festivals, gigs, conferences and sporting events can take place again with large audiences.

Under the government’s current roadmap 21 June is the earliest date that such events will be allowed.

Before the pandemic, the business meetings and events sector was worth £70bn to the economy every year and supported 700,000 jobs.

While some businesses in the sector have pivoted successfully to online conferences, a lot of the sector has experienced an extremely challenging year.

Professor Iain Buchan, from the Institute of Population Health at the University of Liverpool, said it was “heartening” to see people reconnect but the organisers were also looking for lessons to learn.

“We want to start cautiously with venues like this that are easy to reconfigure… looking at movement in the venues, are there any bottlenecks we can do something about? Is our ventilation really working?”

He said delegates were not compelled to be mask-free as part of the pilot event but to practise “good citizenship”… adding scientists were “not expecting to find transmission of the virus”.

The events industry has been particularly hard-hit by the restrictions introduced because of the pandemic.

In order to “keep events sustainable”, Professor Buchan said systems were in place to “respond very quickly if rates increase”.

Brendan Kenny and Jim Forshaw were among those attending the event from Liverpool’s business community.

Mr Kenny, who works in the construction industry, said: “It’s absolutely fantastic. Great to see people, great to engage… do what we used to do.”

Mr Forshaw, a flooring business owner, added: “It’s nice to get back to some sort of normality. It’s nice to see people’s full faces.”

It has taken a considerable amount of work to get to a position where an event on this scale and under these conditions can be held safely.

Claire McColgan, Director of Culture Liverpool, told the BBC: “This has been the biggest learning curve of my whole career. It’s been really tough.

“This time we’re not worrying about the weather or how many people are coming to an event.”

She added: “48% of our economy comes from the visitor economy. We’ve had to sit on Zoom calls for a year and a half.