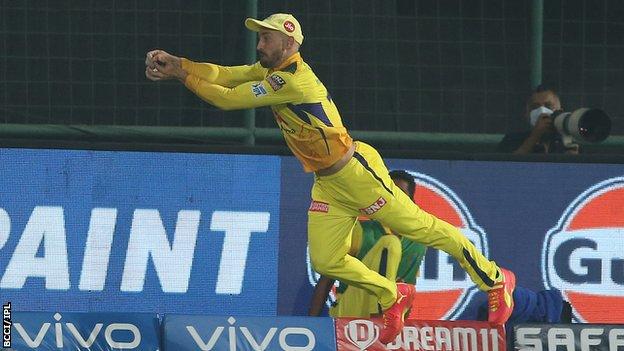 Three-time champions Chennai Super Kings moved to the top of the Indian Premier League table with a seven-wicket win against Sunrisers Hyderabad.

Chasing 172 to win, Ruturaj Gaikwad made 75 and Faf du Plessis 56 as Chennai won with nine balls to spare, despite Rashid Khan’s 3-36.

Sunrisers, who are bottom with one victory from six games, had made 171-3.

The game was the first in Delhi this season, and Warner was visibly frustrated as he struggled for timing for the majority of his 55-balls innings.

Nevertheless he eventually moved to his 50th half-century – the most in the competition’s history – as Sunrisers recovered from the early loss of Jonny Bairstow.

He and Pandey came together when Bairstow, who was dropped by MS Dhoni down the legside from his first ball, mistimed an attempted pull off England team-mate Sam Curran and was caught at deep square leg for seven.

New Zealand captain Kane Williamson then hit a 10-ball 26 in a stand of 37 with Kedar Jadhav, who made 12 off four, as Sunrisers posted a total that gave themselves a chance even if it was ultimately below par.

Chennai were always in control of the chase, scoring above the required run rate, with Gaikwad and Du Plessis sharing 129 in just under 13 overs for the opening stand.

They attacked Jagadeesha Suchith, who went for 45 in three overs, which in turn allowed them to initially milk dangerman Rashid.

Gaikwad eventually fell, after hitting three boundaries in both the 12th and 13th over, resulting in Afghanistan’s Rashid taking three quick wickets and putting a temporary brake on Chennai’s charge to victory.

Suresh Raina and Ravindra Jadeja then shared an unbroken 25 to guide Chennai, who have won five in a row after defeat in their opening game, over the line.