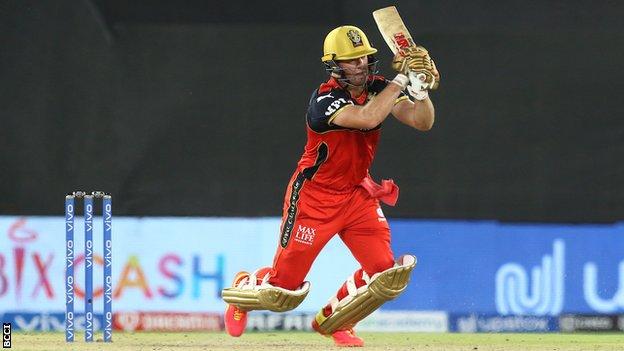 AB de Villiers hit an unbeaten 75 from 42 balls as Royal Challengers Bangalore beat Delhi Capitals by one run in a thriller to go top of the Indian Premier League.

Delhi needed 15 from the final over of their reply, but fell short despite Shimron Hetmyer’s 53 off 25 balls.

Needing six off the final ball, Rishabh Pant (58 not out) could only find the boundary for four.

After losing the toss and being put into bat, RCB lost both openers in the space of two balls.

Virat Kohli struggled to get going – scoring 12 off 11 balls – before being bowled by Avesh Khan, while Devdutt Padikkal fell to Ishant Sharma for 17.

Rajat Patidar (31) and Glenn Maxwell (25) offered some stability to the RCB innings but it was De Villiers who set the tone with a well-timed knock.

The South African accelerated his innings towards the end, hitting Marcus Stoinis for 23 runs in the 20th over.

Delhi’s reply was then delayed for around 20 minutes as the umpires waited for a sandstorm to pass.

As play continued with no reduction in overs, Kyle Jamieson dismissed opener Shikhar Dhawan – the top run-scorer in this year’s IPL – for seven.

Mohammed Siraj had Steve Smith (4) caught behind and Harshal Patel took the wicket of Prithvi Shaw (21) to leave Delhi 47-3 after 7.2 overs.

Patel – this season’s leading wicket-taker – claimed his 17th dismissal of the tournament by removing Stoinis for 22.

Hetmyer unleashed a late fightback, smashing Jamieson for three sixes in the 18th over and sharing an unbeaten 78-run partnership with captain Pant.

But seamer Siraj bowled a fantastic final over – with pinpoint yorkers – to help RCB over the line.

RCB – in search of their first-ever IPL trophy – have now lost just one of six matches, while third-placed Delhi have four wins and two losses.