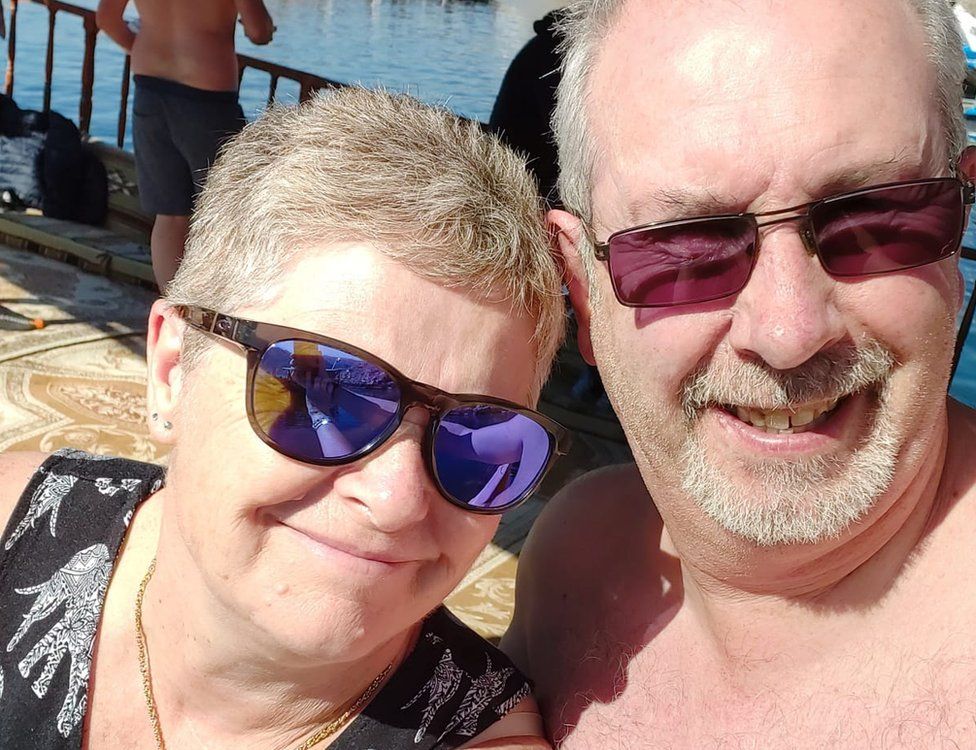 Cruise enthusiast Cathy Rogers doesn’t know how many trips she’s been on – she stopped counting when it passed 30.

From 17 May cruises will be allowed to resume from England under step three of the roadmap out of lockdown and demand is high.

Cathy, who runs a Facebook group for enthusiasts, has already booked up and has no qualms.

“I really would feel much safer on board a ship than even in my local supermarket,” she says.

“There’s always higher levels of hygiene than you would get in a normal restaurant or a pub. I’m really looking forward to seeing how they make things as normal as possible for us on board.”

Just outside Edinburgh three Fred Olsen cruise ships are being readied for service in anticipation of a rush in demand.

After 14 months of standstill, the paint is being retouched, the chairs re-upholstered and the carpets relaid, ready to set sail this summer.

They were only launched a few weeks ago.

Its hotel operations director, Thomas Rennesland, tells the BBC he has never been busier, but also that the last year has been stressful.

“Unfortunately we had to say goodbye to some really fantastic colleagues as the ships were not moving. Then of course we had to start planning the re-entry into service. No one has ever done anything like this before.”

When cruising does restart it will be phased, starting with scenic tours around the UK stopping and starting at the same port, or so called trips to nowhere out to sea.

The first ships could set sail from 17 May from England, but the industry hopes that the other UK nations will follow too.

Some operators, like Virgin Voyages, are seeing it as a chance to introduce cruising to a new customer, with 3 or 4-day trips as an alternative to a staycation. Along with testing and cleaning protocols, they are requiring all passengers and crew to be fully vaccinated before they travel onboard.

“I think you rebuild trust by creating these protocols so that people feel safe. It’s the right thing for us to do to make people feel comfortable.”

At the beginning of the pandemic, there were several stories of outbreaks on different international cruise liners.

Bob Sanguinetti, boss of the UK Chamber of Shipping, says the industry, like the rest of society, has learned lots of lessons since then.

There are now protocols for UK operators that mean all cruise passengers will need to take a test before they embark, as well as guidelines on social distancing, bubbles and how to monitor passengers’ health.

“I don’t think it will be difficult to persuade passengers back on board,” says Mr Sanguinetti. “Cruise companies are doing their utmost to ensure that risk is kept to an absolute minimum.”

Chris and Wendy Hignell are booked to travel from Southampton to Liverpool in May. They don’t mind that this time it will be closer to home.

“The fact we can’t get off is not a problem, just to be able to enjoy the ship itself is the thing,” says Wendy.

They feel reassured by the safety measures too.

“The numbers are greatly reduced so that’s a big bonus. Everyone’s being tested, there’s masks, there’s social distancing,” says Chris. “It makes us think it’s worth having a go and feeling safe whilst we do it.”

Still the industry – which has been on pause for more than a year – has work to do to regain lost ground.

“The pandemic has had a massive impact on the industry, not just cruise companies, but tour operators, ports and other destinations where they visit,” says Mr Sanguinetti.

“The UK cruise sector contributes about £10bn to the UK economy every year and supports over 80,000 jobs. A lot of those will have gone.”