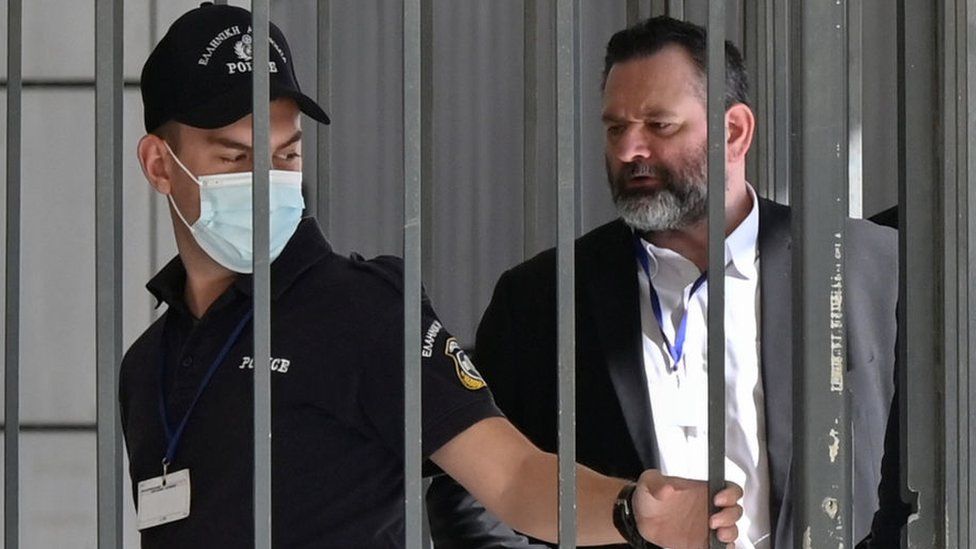 Ioannis Lagos, facing jail in Greece for crimes linked to the neo-Nazi Golden Dawn party, has been detained by Belgian police after the European Parliament voted to lift his immunity.

Lagos was convicted last October, along with the rest of the party leadership, of running a criminal organisation.

Although the court jailed him for more than 13 years, he was given immunity because he is an elected Euro MP.

Lagos, 48, said he was on his way to prison in a Belgian police car.

“The thieves, atheists, anti-Greeks are taking me to jail,” he complained on Twitter, hours after colleagues in the European Parliament voted by 658 to 25 to strip him of his immunity. Greek reports said Belgian police had responded to an Interpol notice filed by their Greek colleagues.

Golden Dawn reached peak popularity during Greece’s crippling financial crisis in 2012, but it became notorious for links to attacks on immigrants and left-wing activists.

When anti-fascist hip-hop musician Pavlos Fyssas was murdered by a party supporter in the Keratsini area of western Athens in 2013, a criminal inquiry was launched.

Lagos was both MP and a local commander in the Piraeus area near where Fyssas died. He was elected to serve Golden Dawn in the European Parliament in 2019 but defected weeks afterwards, becoming an independent MEP. It is not yet clear if he will challenge extradition.

Golden Dawn leader Nikos Michaloliakos was among 39 defendants given jail terms last October at the end of a five-year trial for running a criminal gang or taking part in it.

Lagos avoided arrest because of his parliamentary immunity while fellow leading member Christos Pappas disappeared. He has not been seen since the verdict was announced, prompting criticism of both police and politicians for allowing him to go on the run.

Pappas has long been viewed as Golden Dawn’s ideological godfather and was photographed under a Nazi flag and filmed teaching children to do the Hitler salute.