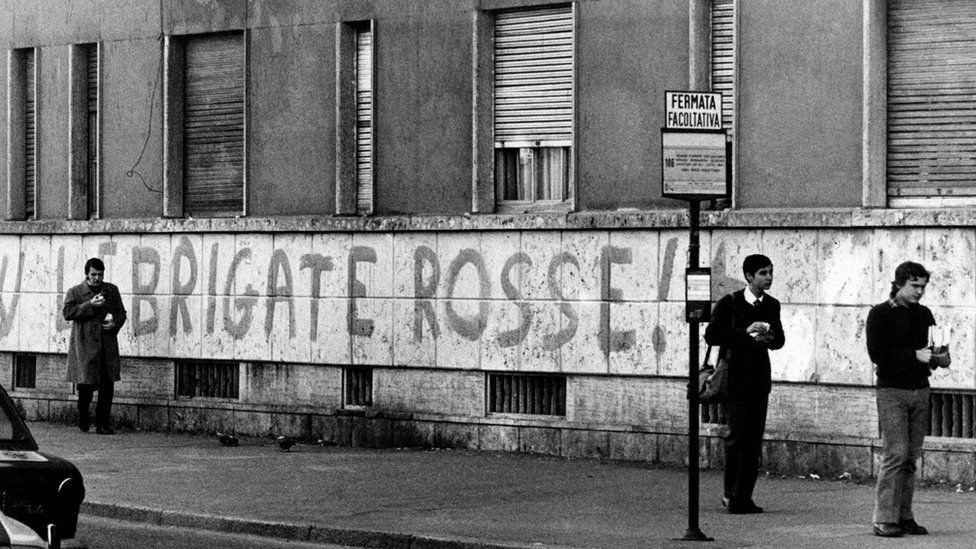 The seven, and three other Italians still being sought, had been convicted of terrorism charges in Italy dating back to the 1970s and 1980s.

France had offered left-wing radicals protection from extradition under a controversial policy.

Italy’s prime minister welcomed the arrests, saying the crimes had “left a wound that is still open”.

The Red Brigades and other militant groups carried out violence in Italy during the so-called Years of Lead.

The period, from the late 1960s to early 1980s, got its name from the vast number of bullets fired.

The Red Brigades were blamed for numerous killings, including the 1978 abduction and murder of former prime minister Aldo Moro.

What do we know about the arrests?

The arrests on Wednesday involved members of the Red Brigades and a co-founder of the far-left militant group Lotta Continua.

In the 1980s, France’s then socialist president François Mitterrand offered Italy’s far-left radicals protection from extradition under the “Mitterand Doctrine”, on the condition that they renounced violence and had not been accused of bloodshed.

The policy has long been a source of tension between the two countries, with Italy calling on France to hand over some 200 people.

The French presidency on Wednesday said the arrests did not mark a break from the “Mitterrand Doctrine”, because Mr Mitterrand himself had said that those with blood on their hands should not be protected.

But it said they were part of efforts to resolve tensions.

“France, also affected by terrorism, understands the absolute necessity of providing justice for victims,” a statement said. “With this transfer, it is also part of the urgent need to build a Europe of justice in which mutual confidence must be at the centre.”

Officials in France said the arrests followed months of discussions between the two countries.

Foreign Minister Luigi Di Maio said the arrests proved that “one cannot run away from one’s responsibilities, from the pain inflicted, the harm caused”.

But the lawyer for five of the detainees called the arrests an “unspeakable betrayal on France’s part”.

“Since the 1980s, these people have been under the protection of France. They’ve remade their lives here for 30 years in the full view and knowledge of everyone, with their children and their grandchildren… and then in the early morning, they come looking for them, 40 years after the facts,” Irène Terrel told AFP.

It is not yet clear what will happen to the detainees.

French Interior Minister Gerald Darmanin told France Inter radio that it was up to a French court to decide whether they would be extradited.