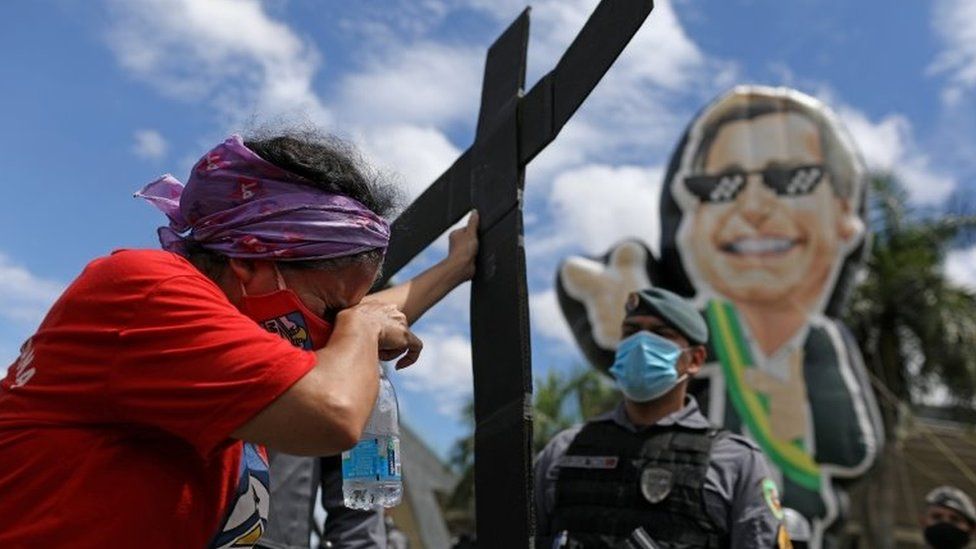 Brazil’s Congress has launched an inquiry into the government’s handling of the coronavirus pandemic.

The country has recorded more than 14 million cases and 391,000 deaths since the pandemic began.

The inquiry could potentially lead to the impeachment of President Jair Bolsonaro who has frequently spoken out against lockdowns, masks and vaccinations.

Mr Bolsonaro says he is “not worried” by the inquiry.

The president has faced widespread criticism over his handling of the outbreak and his support has plummeted.

But the president continues to oppose any lockdown measures to curb the outbreak.

He argues that the damage to the economy would be worse than the effects of the virus itself, and has tried to reverse some of the restrictions imposed by local authorities in the courts.

In March, Mr Bolsonaro told Brazilians to “stop whining” about Covid, a day after the country saw a record rise in deaths over a 24-hour period.

A typically bullish Mr Bolsonaro told reporters he wasn’t worried about the commission and that he didn’t owe it anything.

But this is a damning indictment of what is widely criticised as his botched response, which made Brazil the Covid epicentre earlier this month, with daily deaths exceeding 4,000.

The inquiry could recommend impeachment – or even criminal charges. His political future and chance of re-election next year is at stake as Brazil finally asks what went so badly wrong.

The official inquiry, ordered by the Supreme Court, will be conducted by an 18-member senate commission.

The commission will investigate a number of the government’s actions, including:

It will also analyse whether federal or state officials committed criminal negligence or corruption. The findings could then be submitted to authorities with the ability to prosecute.

It will also be able to call on witnesses. Among those expected to appear is Mr Bolsonaro’s former press secretary, Fabio Wajngarten.

In an interview with Brazilian magazine Veja last week, Mr Wajngarten insisted that it was not the president who was to blame for the slow rollout of vaccines in Brazil but the health ministry, which he accused of “incompetence and inefficiency”.

Since the pandemic began, three health ministers have left their post and some analysts think the president and his allies may try to blame former health minister General Eduardo Pazuello for Brazil’s poor record on combating Covid.

Mr Bolsonaro sacked Gen Pazuello – an army officer with no medical training – in March and replaced him with a cardiologist, who became Brazil’s fourth health minister since the start of the pandemic.

But the president has not only clashed with his former health ministers. He also made powerful enemies when he labelled some of the governors who imposed lockdowns in their states “tyrants”.

And with one of Mr Bolsonaro’s critics, Renan Calheiros, named as rapporteur of the commission conducting the inquiry, the president faces a rocky time ahead.