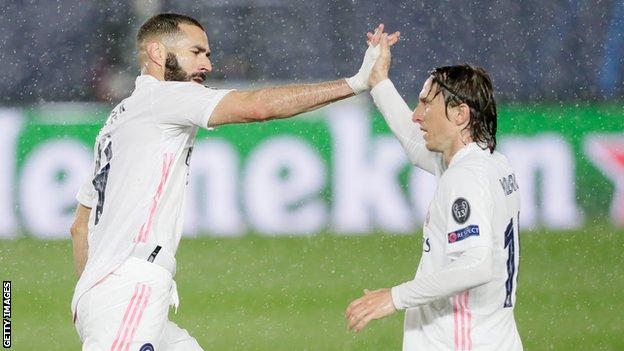 Chelsea produced a composed performance to secure a fully deserved draw and a crucial away goal to put themselves in a promising position after their Champions League semi-final first leg against Real Madrid.

Thomas Tuchel’s side were superior on the night and might even regard themselves as unfortunate not to take an advantage into the return at Stamford Bridge in eight days’ time as they set their sights on a final date against either Manchester City or Paris St-Germain in Istanbul on 29 May.

Chelsea over-ran Madrid in the early stages and should have taken the lead when Timo Werner shot straight at keeper Thibaut Courtois from only six yards – but they were ahead after only 14 minutes when Christian Pulisic kept his cool to steer home a clever finish.

Real were on the ropes but danger man Karim Benzema, who had glanced the outside of an upright from long range, brought them back into the game with a brilliant equaliser, cushioning the ball with a header before sending an acrobatic volley beyond Edouard Mendy in the 29th minute.

Chelsea had the better of the second half but could not carve out the chance to score a potentially vital second. Manager Tuchel will still be very satisfied with both the performance and result.

Chelsea’s only regret as they left rain-soaked Madrid will be that they did not make their moments of superiority count even more after a performance of quality and discipline.

Werner was guilty of an awful miss in the opening moments, shooting straight at Courtois with the goal at his mercy, but Chelsea were soon celebrating the brilliance of Pulisic, who showed commendable calm to go around the keeper in a congested penalty before steering a shot between two Real Madrid defenders on the line.

Chelsea had a brief spell of anxiety around the time when Benzema equalised but they were rarely troubled until the dying seconds when Raphael Varane steered a header wide.

Tuchel will be happy but he knows this tie is far from over and much work remains to be done against this dangerous Madrid side, who have already proved their enduring ability to get the job done in the Champions League by eliminating Liverpool.

Chelsea have the edge because of that away goal but Real are masters of these situations and will still travel to Stamford Bridge with confidence for the second leg.

Chelsea will rightly regard themselves as having a very slight advantage after not only avoiding defeat but also taking an away goal back to Stamford Bridge for the second leg.

Real Madrid, however, still present a serious threat and they may well be satisfied to have avoided defeat after a desperately slow start in which they could have conceded more than one goal and were grateful for that awful miss by Werner.

And in a side packed with experience and battle-hardened, streetwise operators who have been down this route before, there will be a steely determination that they can still navigate a way past Chelsea into the final.

Benzema, at 33, remains the consummate striker and will be the big danger to Chelsea’s aspirations of reaching their first final since they beat Bayern Munich in their own Allianz Arena in 2012.

The French striker was Real’s best performer, so has been so often under-rated and in the shadow of the likes of Cristiano Ronaldo. The brilliant strike that pegged Chelsea back was his 71st goal in the Champions League, making him joint-fourth highest scorer in the competition, level with another Real legend Raul and only behind Ronaldo, Lionel Messi and Robert Lewandowski.

Benzema’s class is permanent and he will be a huge threat in the return game at Stamford Bridge.