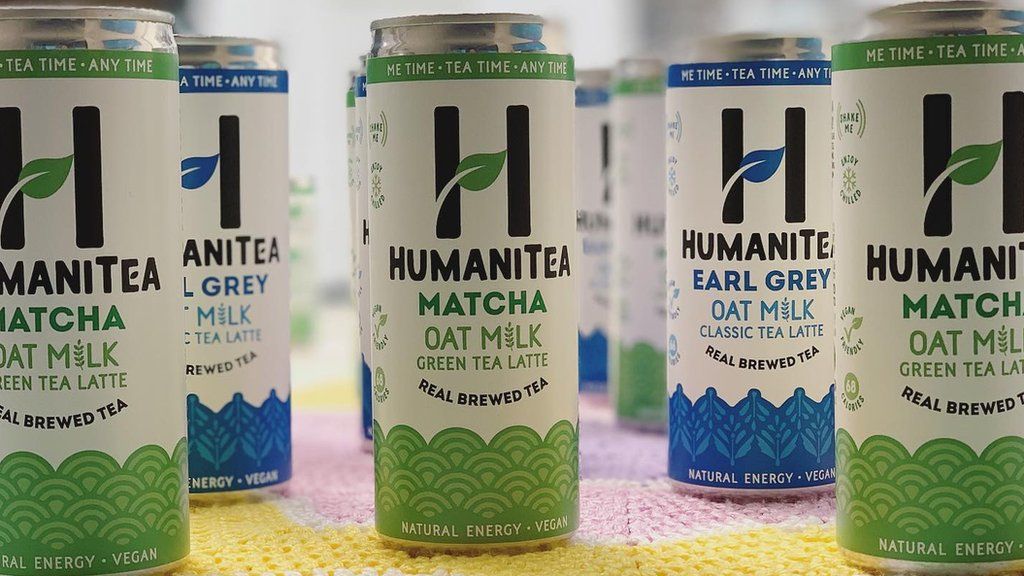 As part of our business advice series CEO Secrets, Tina Chen explains how she stays strong as a solo, female entrepreneur, starting a business in a new country.

Tina Chen, 28, describes herself as a “solo-preneur”. She is the founder of HumaniTea, a range of vegan milk tea drinks.

She started the company in London in December 2018 and the business has grown steadily since then, despite the pandemic. She has recently started factory production of her product after a successful crowdfunding campaign and has sold more than 5,000 drinks.

This year she takes on her first two employees, through the government’s Kickstart scheme.

But along the way she has come close to burnout and she warns that things can get tough, especially when you’re starting out on your own.

The idea for Tina’s product stemmed from her Asian-American heritage. Tina was born in Taiwan, but her family moved to Los Angeles when she was four.

In Taiwan her family used to drink bubble tea – a sweet drink that combines milk, flavoured tea and tapioca pearls that are sucked up through an extra large straw – and the drink was also popular in the Taiwanese community in California.

Tina attended the University of California, Los Angeles (UCLA), which is where she caught the business bug – she took some business classes, joined an entrepreneurs’ club and watched friends raise huge sums for ideas using crowdfunding sites.

She went on to do an exchange year in London, giving her a taste for the city, which she made her home after doing an MBA at Imperial College.

While in the UK she noticed there were plenty of coffee lattes for sale in supermarkets, but there appeared to be a gap in the market for tea equivalents. She wondered if she could brew a version of her favourite childhood drink that was low in sugar and used vegan milk, a concept that was gaining popularity.

Since she had no background in the food industry, she began experimenting in her home kitchen with recipes she found online.

Tina faced all the challenges of setting up the business on her own because she lives alone and has no family in London.

“I searched for a co-founder but couldn’t find someone who would put in 110% like me,” she says.

Tina used to make and sell her product herself, setting up stalls at places like Borough Market in central London.

She would brew and bottle her speciality teas by hand from midnight in a commercial kitchen, then sell them at markets the very next morning – with little time for sleep.

A shift in the kitchens was cheaper to rent at this late time, so it made business sense, she explains, and they were also less busy.

But the punishing hours took their toll and at one point she even badly scalded herself with hot water.

“That’s when I realised that self care is so important when you are starting a business,” she says.

Other setbacks included a copyright dispute over her company’s original name, which she has now changed, and an incident when a pallet of tea leaves didn’t turn up before her first factory production run was due to start. It went missing in transit and waiting for the replacement delayed her product launch by a month.

It can all feel very personal, Tina says, and she has spent a lot of time reduced to tears.

“But I’ve found that crying actually helps me release my emotions, helps me feel better afterwards. It’s a good way to find your level-headedness.”

A mentor’s advice on the matter was also crucial. He urged her not to dwell on the problems that had happened, but instead focus on possible solutions.

Her teas are now stocked in dozens of grocery stores and restaurants, mainly in London. She plans to slowly expand her stockists, including finding some abroad, while also expanding her product range and selling more tea direct to consumers through her website.

Tina thinks it is vital for “solo-preneurs” like herself to build up a support network to get through the tough times.

She found her mentor through the British Library Business Centre.

She’s also built up a group of fellow female food entrepreneurs thanks to networking organisations like Bread & Jam – they regularly WhatsApp to give each other practical and emotional support.

And she’s had advisory help from schemes like Virgin StartUp and Imperial College’s Enterprise Lab.

She’s learned to keep her weekends free from work so that she can spend time with friends.

“Starting a business on your own can feel lonely, but it doesn’t have to be and I don’t feel lonely now,” says Tina.

“The beauty of entrepreneurship is actually the ups and downs.”