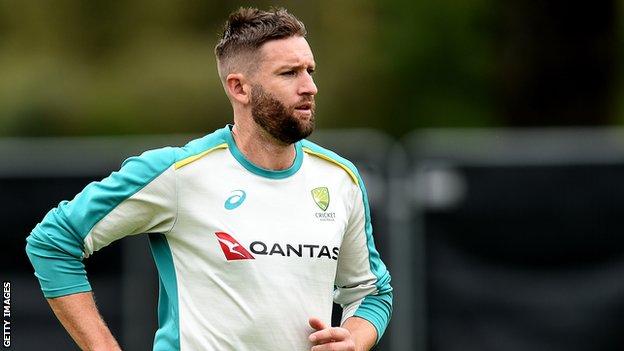 Indian Premier League cricketer Andrew Tye says the coronavirus situation in India is “harrowing”, and he is relieved to have flown home.

The 34-year-old left early on Sunday to return to Australia as India struggles with a surge in cases.

Tye said he felt “well looked after” inside the IPL’s bio-secure bubble.

But, speaking to Stumped, he added: “You’re almost cut off, it’s weird. I found in a way that I sort of lost touch with the outside world.”

The IPL – the world’s richest Twenty20 league – has faced calls for a suspension over the Covid-19 crisis.

Crematoriums in the capital Delhi have been forced to build makeshift funeral pyres, as the city runs out of space to cremate its dead.

Since Tye – plus compatriots Adam Zampa and Kane Richardson – flew home, the Australian government has suspended flights from India.

Australians Pat Cummins, Steve Smith, David Warner, Chris Lynn and Ricky Ponting remain in the country, where more than a million Covid-19 cases have been recorded in just a few days.

Tye, whose IPL franchise the Rajasthan Royals helped him onto a flight home, will now have to quarantine in Perth.

“Inside the bubble it’s incredibly safe and we are very well looked after,” he said.

“It’s just the craziness of what’s going on outside of it, which we get incredibly well sheltered from, that’s a bit harrowing.

“You can drive through the streets and not see any of it but then you look on the news and you see what’s happening and it’s just stark in comparison to what they are actually saying.”

Zampa, who had not featured for Royal Challengers Bangalore before leaving, told Nine Networks Newspapers he wanted to put his “mental health first”.

“I feel like for anyone leaving halfway through a tournament, it’s definitely a financial sacrifice,” said the 29-year-old.

“Obviously the Covid situation over here is pretty dire. I just felt, rocking up to training and stuff, obviously I wasn’t playing in the team as well, I was going to training and I wasn’t finding the motivation.

“[There were] a few other things like bubble fatigue and the chance to get home, once all the news broke about the flights and everything – I thought this was the best time to make the call.”

The league format of the tournament ends on 23 May before the play-offs and the final, which is on 30 May.

Flights from India to Australia have been suspended until at least 15 May and Australia’s Prime Minister Scott Morrison says cricketers who are competing in the IPL will not be prioritised for a return home.

“They’re under their own resources and they’ll be using those resources to, I’m sure, see them return to Australia,” he said.

India’s cricket board has told players it will do “everything” to ensure their safe return home after the tournament.

“Rest assured that the tournament isn’t over for BCCI till each one of you has reached your home, safe and sound,” they said.

Mumbai Indians batsman Lynn said he had asked Cricket Australia to arrange a charter flight back home for Australia’s players at the end of the IPL after the governing body had contacted players about their health and travel plans.

“I texted back that, as Cricket Australia make 10% of every IPL contract, was there a chance we could spend that money this year on a charter flight once the tournament is over?” Lynn told News Corp.

“We are not asking for shortcuts and we signed up knowing the risks. But it would be great to get home as soon as the event is over.”

England limited-overs captain Eoin Morgan, who is skipper of Kolkata Knight Riders, says the tournament should continue as long as it does not hamper the efforts to combat Covid-19.

New Zealand also have a number of players taking part in the IPL, including Kane Williamson, Trent Boult, Kyle Jamieson and Mitchell Santner.

“But they feel well looked-after by their IPL franchises and safe in their bubbles.”