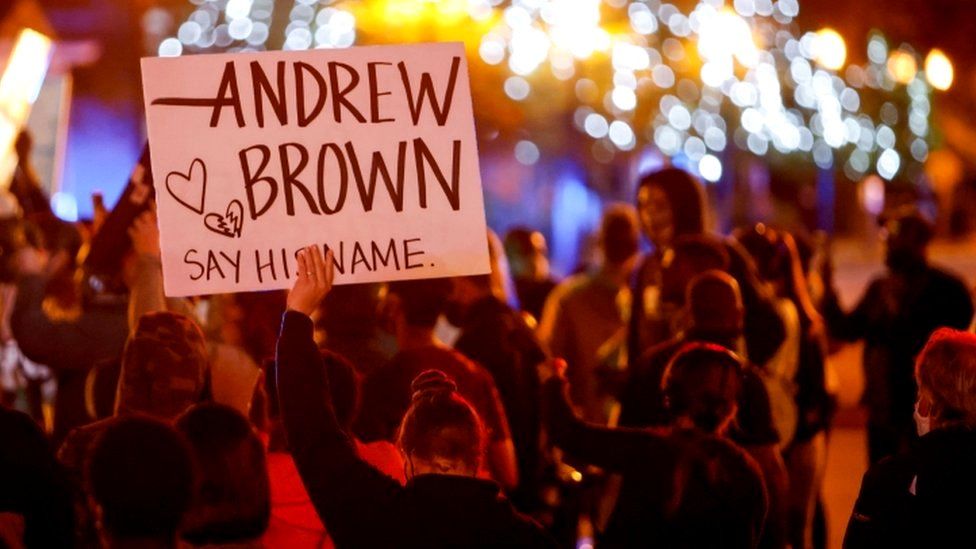 Police in the US state of North Carolina are facing growing calls to release footage of an incident that led to the fatal shooting of a black man.

Andrew Brown, 42, was shot and killed last week during an attempted arrest.

His family, who have only been shown 20 seconds of bodycam footage, have described his death as an “execution”.

And on Tuesday, the FBI said it had opened a civil rights investigation into the incident to “determine whether federal laws were violated”.

Mr Brown’s death comes at a time of heightened scrutiny over the use of lethal police force on African-Americans.

He was killed just a day after a white officer in Minneapolis was convicted of murdering George Floyd in an incident that triggered national outrage and global anti-racism protests.

What happened to Andrew Brown?

Mr Brown was shot by police in Elizabeth City, North Carolina on 21 April. Much of what happened, however, is still unclear.

On Tuesday, Mr Brown’s family said he was shot five times including in the back of the head as he tried to drive away from the officers.

They said an independent, private, autopsy showed he was shot multiple times in the arm but died after being struck in the head.

“It was a kill shot to the back of the head,” Ben Crump, one of the lawyers representing the family, told a news conference. Mr Crump has represented other families in high-profile police shootings of African-Americans, including the relatives of George Floyd.

An official autopsy is yet to be released, but Mr Brown’s death certificate indicates that he died from a gunshot wound to the head.

His family were expecting to be shown the full bodycam video before midday on Monday, but their lawyers said this was delayed by several hours as the sheriff’s office worked to redact parts of it.

They were eventually shown a 20-second clip of the incident that was taken from one bodycam. They are now calling for the release of all bodycam footage from the scene, and a judge will consider a formal request for this on Wednesday.

“Yesterday I saw him executed,” Mr Brown’s son, Khalil Ferebee, said shortly after viewing the footage. “It’s obvious he was trying to get away.”

“Andrew had his hands on his steering wheel. He was not reaching for anything. He wasn’t touching anything,” another lawyer for the family, Chantel Cherry-Lassiter, told reporters.

Sheriff Wooten has backed calls for the public release of the videos, which requires a legal order and is expected to happen imminently.

But he urged caution in jumping to conclusions based on the footage: “They only tell part of the story,” he said.

“This tragic incident was quick and over in less than 30 seconds, and body cameras are shaky and sometimes hard to decipher,” he added.

Elizabeth City Mayor Bettie Parker has ordered a curfew between 20:00 and 06:00 ahead of the expected release of the footage.

“City officials realise there may potentially be a period of civil unrest within the city following [its] release,” the order said.