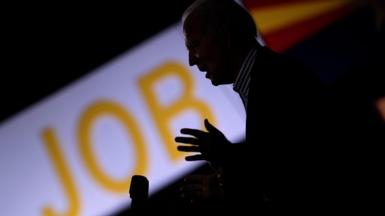 US police officers are seen mocking a 73-year-old dementia sufferer as they watch video of her shoulder going “pop” during her forcible arrest, according to footage released by her lawyer.

Karen Garner was detained on 26 June last year after she walked out of a Walmart in the state of Colorado without paying for $13 of items.

Her elbow was fractured and shoulder dislocated, says her attorney.

An investigation has been launched into the Loveland Police Department arrest.

In the footage released on Monday from the booking area of the police station on the day of the arrest, officers are seen fist-bumping one another as they review body camera video of the incident.

Video from inside Ms Garner’s nearby holding cell shows the frail-looking grandmother slumped handcuffed to a bench while the officers joke about the incident, says her lawyer.

“Ready for the pop? Hear the pop?” one of the officers says at one point, referring to Ms Garner’s shoulder.

As they continue to watch the footage, the same officer says: “I love it.”

The Garner family hired a sound engineer to enhance audio of the officers’ remarks.

Their lawyer has filed a federal lawsuit against the department, alleging the officers violated the Americans with Disabilities Act and “violently assaulted” Ms Garner.

Attorney Sarah Schielke says her client went six hours without medical help while confused and crying in pain after an arrest that amounted to “torture”.

“They failed Karen Garner,” Ms Schielke said in a press release. “They failed the community. And they did it all on camera.”

Loveland police said in a statement on Monday they would not be making any comments pending the results of a “criminal investigation” launched last week.

The Larimer County district attorney is looking into the department’s use of force during Ms Garner’s arrest. Loveland police chief Robert Ticer has pledged full transparency with the inquiry, which will be led by Fort Collins Police.

The bodycam footage caused public outcry when it was released earlier this month. It shows two police officers stopping Ms Garner as she was picking flowers by the roadside after she left the Walmart store in the town of Loveland, about 50 miles (80km) north of Denver.

CCTV from the supermarket shortly beforehand showed members of staff stopping Ms Garner to recover the $13.38 of merchandise, which included cans of soda and laundry detergent.

After she walks away from the officers, she is thrown to the ground, handcuffed, shoved face down on the bonnet of the police car and has her legs tied together with a hobble. She was left bleeding.

“She hasn’t come back the way she was before,” Ms Steward told the newspaper. “It was too much.”

The release of the footage comes amid a nationwide reckoning over police brutality, especially against African Americans, although Ms Garner is white.