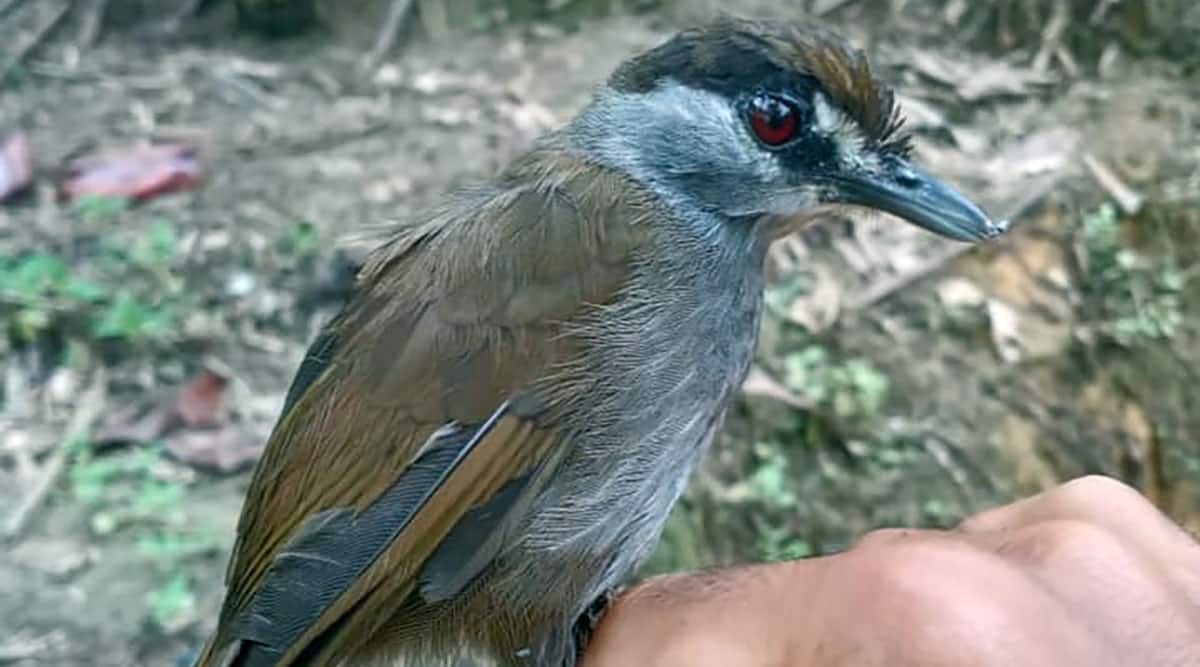 What might be Asia’s longest-missing bird just came out of hiding. For the first time in 170 years, a black-browed babbler has been found in Indonesia, researchers reported last week. The discovery of the muted black, gray and chestnut-brown bird solves what an authoritative birding guide describes as “one of the great enigmas of Indonesian ornithology.”

“When we actually got confirmation of the identification, I did a little prayer and bowed down to celebrate,” said Panji Gusti Akbar, an ornithologist and lead author of the paper describing the new species. “I felt excitement, disbelief and a lot of happiness.”

Ornithologists first described black-browed babblers around 1850 after the collection of the one and only known specimen of the species. The specimen was at first mislabeled as having come from the island of Java rather than Borneo, stymieing early attempts to locate additional black-browed babblers. But even after ornithologists cleared up the geographic mix-up, no one managed to find the bird. It has not helped that, traditionally, few birders and ornithologists have ventured to the Indonesian side of Borneo.

In 2016, that began to change with the founding of BW Galeatus, a bird-watching group in Indonesian Borneo. BW Galeatus members have reached out to local people to teach them about the avian diversity in their provinces. Two of those local men, Muhammad Suranto and Muhammad Rizky Fauzan, were curious about the identity of a black-and-brown bird they sometimes saw flitting around during their trips into the forest in South Kalimantan, one of Indonesia’s provinces on Borneo. In October, Suranto and Fauzan managed to catch one of the birds and text photos to Joko Said Trisiyanto, a member of BW Galeatus.

“I was confused when we got the pictures, because it looked a bit like the Horsfield’s babbler, but it didn’t really fit,” Trisiyanto said. The photos more closely matched an illustration of a black-browed babbler — a bird listed in Trisiyanto’s guidebook as possibly extinct.

Perplexed, Trisiyanto passed the images on to Akbar. He was shocked.

“I started pacing around my house, just trying to contain my excitement,” Akbar said.

He sent the photos to other experts, including Ding Li Yong, a conservationist at BirdLife International in Singapore and the regional liaison for the Oriental Bird Club, a Britain-based bird group. Yong at first thought someone was playing a prank — that he was looking at a photoshopped image, perhaps of an antbird from Ecuador.

“It took me awhile to come to grips with this thing,” Yong said. Once he realized the photos were legitimate, he said, “I had a tear in my eye.”

“This is a really big deal for Indonesian ornithology — as shocking as rediscovering the passenger pigeon or Carolina parakeet,” Yong said, naming two extinct bird species. “But this is closer to home, a bird from the part of the world I live in.”

After the bird’s identity was confirmed, Trisiyanto persuaded Suranto and Fauzan to release the captured animal back into the forest. He and Akbar hope to use the black-browed babbler’s discovery to build greater local interest in nature and to bring tourist dollars to the region. They also plan to train Suranto and Fauzan as birding guides.

“Bird watchers from all over the world have already started contacting me about the possibility of visiting and seeing this bird,” said Akbar, who is a member of Birdpacker, a bird-watching and guiding group based in East Java.

As soon as COVID-19 travel restrictions lift, he and his colleagues plan to mount an expedition to study the black-browed babbler. “Basically, we have zero knowledge about this bird,” Akbar said.

Already, though, they are filling in some blanks. For example, the 170-year-old type specimen has bright-yellow glass eyes and legs that have faded to pale brown. Based on photos of the living bird, though, the researchers now know that the species has deep-scarlet eyes and gray legs.

“We’re now seeing this bird alive for the first time in all of its natural glory,” Yong said. “Borneo is an island of surprises, and there’s a lot to still be discovered and learned.”