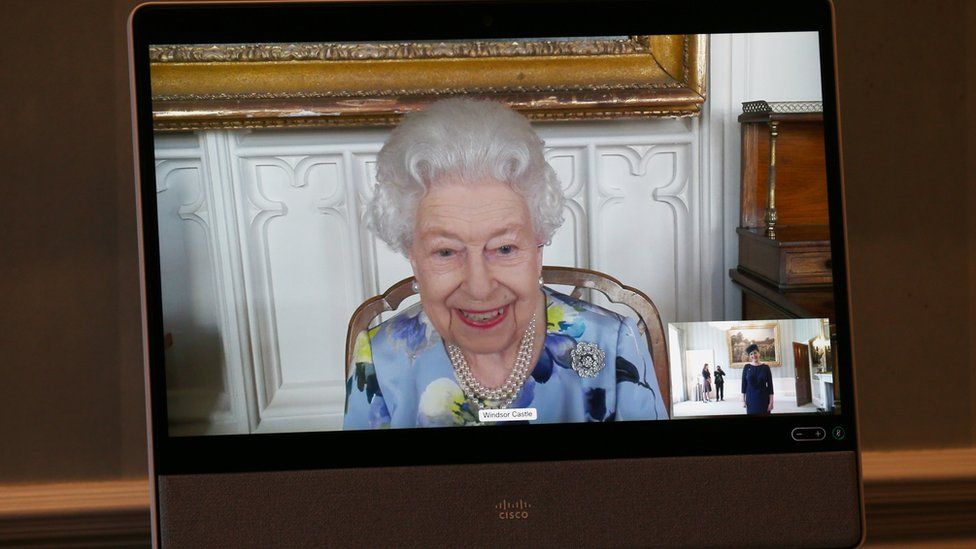 The Queen has been photographed carrying out official duties for the first time since the death of her husband, the Duke of Edinburgh.

The monarch, 95, held virtual audiences via video-link on Tuesday from Windsor Castle.

The Queen was pictured on a computer screen smiling as she held audiences with ambassadors from Latvia and Ivory Coast who were at Buckingham Palace.

The Royal Family has since resumed taking part in official engagements.

For the engagements she was dressed in a pale blue floral dress which featured large purple, white and yellow flowers, with a three-string pearl necklace and a diamond brooch as accessories.

Latvian ambassador Ivita Burmistre presented the letters of recall for her predecessor and her own letters of credence at the audience, as did Sara Affoue Amani, ambassador from Ivory Coast.

Although it is the first time the monarch has been pictured carrying out official duties since the death of her husband of 73 years she has continued to work during the period of mourning.

She held her first in-person event on 13 April – an audience and investiture with Earl Peel, who was relinquishing his role as Lord Chamberlain.

A day later she welcomed her new Lord Chamberlain, Baron Parker, who was overseeing Prince Philip’s funeral, at another Windsor ceremony.

She was not photographed at these two events.

Although the Queen was not seen in public, Buckingham Palace considers these audiences official public engagements because they are listed in the court circular.

It was their first royal visit since the end of the period of mourning and took place two days before their 10th wedding anniversary.

The Queen, the nation’s longest-reigning monarch, had her 95th birthday just 12 days after her husband’s death and used her birthday message to thank the public for messages of comfort during a “period of great sadness”.

Prince Philip was laid to rest in a Covid-compliant ceremony at St George’s Chapel at Windsor Castle on 17 April.

During the service the Queen was pictured sitting alone due to social distancing rules.