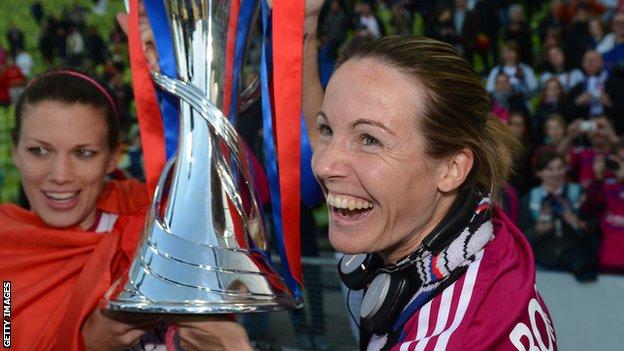 Lyon have appointed Sonia Bompastor as their new coach, making her the first woman to lead the 14-time reigning French women’s champions.

Former France captain Bompastor, 40, replaces Jean-Luc Vasseur at the helm of Europe’s most dominant female side.

Vasseur was sacked after Lyon’s five-year reign as European champions was ended by Paris St-Germain in the semi-finals earlier this month.

PSG lead the French league by a point, threatening to end Lyon’s grip.

Both teams have five games remaining, with second-placed Lyon hosting PSG in a pivotal league match on 29 May as they search for a 15th successive title, having won the league every year since 2007.

Lyon said the move to replace Vasseur with Bompastor came after discussions to “find the necessary mechanisms to allow the team to successfully finish a season that has been played in difficult circumstances”.

Norway striker Ada Hegerberg, who won the Ballon d’Or for the best female player in the world in 2018, has not played this season as she continues to recover from a serious knee injury.

The club also highlighted the absences of Griedge Mbock, Sara Gunnarsdottir and Damaris Egurrola as other key factors behind their inability to dominate this season.